SINGAPORE - A dusty bottle of saga seeds, a one-legged Singa lion figurine, and a miniature casino slot machine: these were all, at one point, secondhand junk hawked at the now-defunct Sungei Road flea market.

Now, they have been salvaged and put together in an online project, Funeral In 25 Objects, which pairs the items with poetry in a farewell to the market, as well as a critique of the circumstances that led to its closure.

Artist Ng Xi Jie, 30, and writer Michelle Tan, 29, bought the 25 objects from the market before it closed in July.

The project went live on Tuesday (Aug 22) - coincidentally the first day of the seventh lunar month, or Ghost Month, although its creators say this was unintentional - and has since gone viral.

Each object was photographed and matched to a different local politician, along with a personalised haiku.

The politicians are members of Singapore's Cabinet, along with three additional Members of Parliament for Jalan Besar GRC, where the market was located. 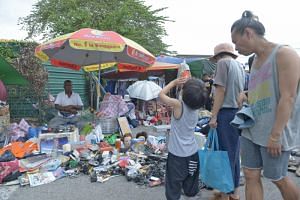 In Pictures: Last day of Sungei Road Market marks end of an era

The project's website says "25 Singaporean politicians are each gifted an object from the recently shut down Sungei Road Market" but Tan and Ng said the items have not actually been sent to the chosen politicians.

The project was born out of Ng's love for secondhand objects. Ng, who is pursuing a master's in art and social practice at Portland State University in the United States, has been going to Sungei Road market since she was in her early 20s and says she was "heartbroken" when she heard it was to close.

Sungei Road market, which was started in the 1930s and is Singapore's oldest, was closed to make way for future residential and commercial development. Attempts to relocate the 200 or so hawkers who once made a living there are ongoing.

Ng spent $90.50 on the objects, with the most expensive being a $15 Humpty Dumpty coin bank with a wide smile for Transport Minister Khaw Boon Wan.

Tan, a playwright, wrote the haiku.

The object-poem associations range from the whimsical and poignant to the critical.

A pair of Young Ecologist and Young Environmentalist pins - badges given to pupils who complete science activities - for Prime Minister Lee Hsien Loong pays homage to his frequent Facebook posts on nature, while Deputy Prime Minister Tharman Shanmugaratnam is represented by a Tiger Beer ballpoint pen that hints at his past as a poet.

Minister for the Environment and Water Resources Masagos Zulkifli's objects are some rolls of scotch tape and double-sided tape, in a reference to the National Environment Agency's role in closing off the market.

Meanwhile, Minister for Education (Higher Education and Skills) Ong Ye Kung, who helms the SkillsFuture movement, gets some foolscap notes on past-year examination questions, along with the haiku: "What of a future/ if our best and only skill/ is breaking the past?"

Ng and Tan plan to hold an exhibition with the objects early next year. "It's important for people to see and touch the objects, and through that gesture elevate them to something gallery-worthy," says Ng.

To preserve them in their original state, she has neither washed nor cleaned any of them. They now reside in her home inside a suitcase, which she also bought from the market.

"Objects are mirrors into the cultures that produced them," says Ng. "I hope people can see this as a wistful, humorous take on something sad that has happened to our country, and that it brings new perspectives and ways of thinking which people will be open to."