More independent producers are helping to bring works to the stage, developing artists and originating ideas

Flexibility, thy name is the producer.

In any theatre or dance production, a producer might do the marketing, secure sponsorships and raise funds, liaise with suppliers, manage logistics and deal with the media, among other roles.

He is the one who makes things happen.

The Singapore performing arts scene is seeing a growing number of independent producers who help to bring productions to the stage.

They operate outside the usual arts company circuit, preferring to collaborate with ad-hoc teams which are often set up to work on a production before dissolving.

The idea of there being one guru in an arts company - there has been a shift as to who that source of creativity is.

CREATIVE DIRECTOR, PRODUCER AND CURATOR JEREMIAH CHOY on the rise in independent producers as a necessary evolution of the arts scene

Some work closely with specific artists and help to develop their practice on a long-term basis - by getting them showcased in overseas festivals and platforms, for example.

A newer term emerging now is "creative producer". This person helps to originate the idea for the production or contributes to the entire production creatively. 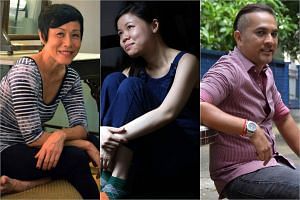 "There is no one dictionary definition of what a producer is," says 23-year-old Benedict Leong. He is the assistant producer for Tropicana The Musical, which is set in 1960s Singapore and based on the famous nightclub of the same name. It premieres at Capitol Theatre next April.

The full-time national serviceman - who works on the musical during his time off - is assisting actress Tan Kheng Hua, who is the producer for Tropicana.

Leong says: "It's about how you realise something once you set your mind on a particular idea. I get a kick out of the process of putting a show together."

He says: "Among the younger generation, there hasn't been much talk about producing - or they might be doing a producer's job, but don't know it. The term is new, but the job isn't."

The master's student in creative producing at the Royal Central School of Speech and Drama in London is producing Bhumi, a Singapore-Britain contemporary dance production showing at Edinburgh Festival Fringe until Saturday.

The National Arts Council estimates that there are a dozen active independent producers in the performing arts scene, though there are more practitioners, especially younger ones, who may also produce on top of assuming other roles.

Art schools here do not specifically teach producing, though there are art management courses that might teach some similar skills.

The arts council notes the "increased momentum in creative producer-led projects" and acknowledges that these independent arts practitioners and producers "add to the diversity of our scene".

It says it plans to "move towards a more holistic approach to support the pool of independent creative producers as well as nurture emerging ones".

Adds the council's deputy chief executive Paul Tan: "Discussions have started to move all the individual pieces together that will ensure that artistic aspirations are meaningfully supported at every stage of a work's development."

There were four participants in the inaugural programme, including independent producer Pearlyn Cai, 34, and up to two more participants will be chosen this year.

The second iteration of the programme runs for 15 months and incorporates a residency with an international arts organisation, networking opportunities and mentorship with experienced producers from Singapore.

In June, the organisers ran a talk, titled Hey! Are You A Creative Producer?, at Centre 42, which attracted about 100 people. They intend to hold another talk later this year.

Choy, 54, says the rise in independent producers comes as a necessary evolution of the arts scene. "It's no longer the case that productions have to be artistic director-centric. The idea of there being one guru in an arts company - there has been a shift as to who that source of creativity is."

A producer can also be "attentive to individual artists who don't fit into the current framework", says Tang.

He works with artists such as Singaporean performance-maker Choy Ka Fai, whose contemporary dance work SoftMachine defies categorisation as it melds together research, dance, demonstration, discussion and video.

This "championing relationship between artist and producer" and helping artists to find touring opportunities is something Cai is interested in. She is now producing a Singapore-Scotland work with Glasgow-based Singaporean artist Ramesh Meyyappan.

"Our main season slots are very few and, in a country like Singapore, companies are more risk-averse and dependent on established actors and playwrights. Emerging playwrights need more support and these independently produced platforms can give them more scaffolding to develop," he says.

Besides mutually co-existing, companies and independent producers can work together as well.

Kuik Swee Boon, artistic director of T.H.E Dance Company, says: "With companies, there are certain structures in place in terms of presenting work. Where we benefit is when producers step in to fill a need in the work process or bring their individual strengths to boost the creative and operational aspects."

CultureLink's Goh observes that graduates from arts schools here may no longer view companies "as the gold standard in the industry".

She says: "Young people want to develop their own ideas. They have something to say and they have the confidence and maturity to say it in their own way."

One such person is Cui Yin Mok, 28, an independent creative producer who looks for opportunities to create "more meaningful and relevant" work that is socially engaged.

It involved running workshops in sound, performance, movement, narrative and photography with participants with visual disabilities.

While independent producers here say they enjoy the process of working on something with their collaborators and seeing it to fruition, they admit that the job is very tough.

As it is, not many know what producers do and hence may not value them.

Producers' responsibilities are many, including sometimes having to mother the artists whom they work with - anything to make sure the job gets done well.

Says Mok: "A producer has to be a hustler. You need to manage people, time and resources, while maintaining the artistic integrity of the project. It is very consuming."

Agreeing, Mohamad Shaifulbahri adds: "It's an extremely challenging job, I don't recommend it to everyone. We are constantly worrying, but you can't show it.