A new exhibition at the National Museum presents the fall of Singapore in fresh ways, with intriguing artefacts and intimate war stories

Textbooks may offer a dry, factual account of the fall of Singapore 75 years ago.

But a new exhibition opening on Saturday at the National Museum of Singapore aims to give visitors a fresh perspective of the time in Singapore's past, when the British forces surrendered to the Japanese army on Feb 15, 1942, after about a week of intense battle.

Titled Witness To War: Remembering 1942, the exhibition looks at the moments that led to World War II in Singapore and the aftermath of the British surrender, but from new angles.

It does this through two narrative threads - a macro thread, looking at how other countries in the larger Pacific region viewed the event; and a micro thread, which involves the collection of personal stories and artefacts that give a more detailed and intimate look at what happened during the war.

Ms Angelita Teo, director of the National Museum of Singapore, says: "Visitors will get a sense of what Singapore was like before the outbreak of hostilities. For example, films from Hong Kong were screened in theatres in Singapore to raise funds for the anti-Japanese war efforts.

"The reverberations from the fall of Singapore were also felt across the region, as it drove home the fear of a Japanese invasion in the Australians and New Zealanders, who were made to rethink their security alliances with the British."

Our generation learnt about the war through history textbooks, history lessons... For the first time, I managed to hear from someone who lived through the war.

STUDENT SHIVRAAJ SINGH KHAIRA, 16, who interviewed Mr Tan Hwee Hock, 88, about his life during the war

She adds that the exhibition is timely not only because it commemorates the 75th anniversary of the fall of Singapore, but also because there is "great urgency to preserve the memories of war survivors as many of them are getting older".

The museum worked with 10 international museums and institutions for the show, including the Australian War Memorial, Museum of New Zealand Te Papa Tongarewa and Hong Kong Museum of History.

It put together more than 130 artefacts for the show, many of which have never been exhibited in South-east Asia before.

A star artefact is the katana of Lieutenant-General Tomoyuki Yamashita, who is known for leading the invasion of Singapore and Malaya. The Japanese sword has never been back on Singapore soil since 1942 and had been kept in the museum of the military academy in West Point in the United States since the Japanese surrendered to the Allied forces in 1945.

To create a more immersive experience for a modern audience, the exhibits also range in mediums and presentation style.

A 25-pounder field gun, a new addition to Singapore's National Collection, is presented with a 21/2- minute light and sound installation that recreates the moments of battle. The soundscape ranges from strains of British national anthem God Save The Queen to the marching of Japanese soldiers and blasts of gunfire.

Papers strewn on the floor are recreations of letters that had been airdropped by the Japanese in 1942, urging British soldiers to surrender. There is even the faint smell of gunpowder.

Mr Garth O'Connell, curator for the Australian War Memorial, says that the social and political effects of the fall of Singapore in 1942 "reverberated around for decades after the war", with "every community in Australia" affected.

He notes, in particular, that many Aboriginal prisoners of war returned to Australia after the war, "having survived with the help of local Singaporean families who, despite the risk of death or serious injury, graciously supported them with what little food they had".

He adds: "This sincere respect and remembrance of shared sacrifice from the world's oldest continuous culture (the Aboriginal Australians) to that of the people of Singapore is still appreciated (today)."

Besides including important and significant artefacts to tell the story of the fall of Singapore, curators Priscilla Chua and Sarah Yip also spent months collecting personal accounts of the historic period from war survivors and veterans.

They even went to Pulau Ubin to interview 82-year-old Ahmad Kassim, who, as a child, toiled under the watch of the Japanese on his island home during the war years.

Stories such as these are what many people want to know more about, say Ms Chua and Ms Yip. 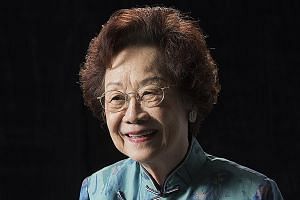 The pair conducted engagement sessions with 120 people over nine months to find out what people wanted to know about the war.

"We found that people were tired of all the old narratives they had read in their history textbooks. They wanted to see something new and stories with more complexity and finer details," says Ms Yip.

They also roped in fresh eyes to uncover some of these little-known stories.

One component at the end of the exhibition is the Student Archivist Project, where selected students from a number of secondary schools interviewed seniors who had lived through the war.

Mr Tan recounted how he had to wait by the docks to try to get extra rice grains from the coolies unloading rice sacks there.

Shivraaj says: "Our generation learnt about the war through history textbooks, history lessons and YouTube videos, but we don't actually have much of a first-hand source when it comes to what people actually felt during the war.

"For the first time, I managed to hear from someone who lived through the war."

Despite the exhibition being about a historical event, it also provides opportunities for reinterpretation and addition.

A Singapore-Australia artist residency project - the National Museum of Singapore's first such residency programme - involves Singaporean artist Debbie Ding and Australian artist Angela Tiatia, who created new contemporary artworks that relate to the subject of the fall of Singapore. The works are located outside the main exhibition gallery.

The artists spent a month each at the Australian War Memorial and the National Museum conducting research and field work about the war.

Ding, 32, created a holographic work, War Fronts, which presents three "archetypes" of battle sites - the coast, the jungle and the bunker.

"When you look at a hologram, you have to search for the image inside it. It's about how people relate to World War II - the picture you see depends on where you are standing," she says.

Curator Chua says there is no one way to best experience the exhibition. One could look solely at the artefacts and derive a story from them or listen to the animated retellings of the personal narratives of war survivors and come away with a different take.

Visitors can respond by writing postcards to some of these seniors after going through the exhibition.

Ms Chua says: "It's about continuing the conversation. If people have their own stories, we encourage them to let us know about them.

"This exhibition is not meant to be representative of everything that has happened. This is just the start and we want to keep it going."

5 highlights of Witness To War: Remembering 1942

Army general Yamashita is known for leading the invasion of Singapore and Malaya in the 1940s, earning him the nickname "Tiger of Malaya" in Japan.

Seventy-five years after it was last on Singapore soil, his katana is back - this time, sheathed to symbolise the end of the war. It is on loan from the West Point Museum in the United States.

The handle of the 17th-century sword bears an emblem of cherry blossoms and is partially made with shark skin and wood.

This dainty item belies a tragic story. The Singapore-made pincushion, which comprises eight miniature figures of Asian children, was purchased by an Australian soldier, Corporal James Clark, before the start of the Pacific War in December 1941.

While Corporal Clark managed to send this souvenir home, he did not manage to return, dying of disease and malnutrition in 1945 after being captured in Singapore and subsequently sent to Borneo. The item is on loan from the Australian War Memorial.

This 25-pounder field gun was used by British and Commonwealth troops in Singapore and Malaya during World War II.

Visitors will get to see it while experiencing an immersive 21/2-minute light and sound installation with sounds of the British national anthem, God Save The Queen, Japanese soldiers marching and blasts from heavy warfare. Completing the installation are empty shell casings, sandbags and a faint smell of gunpowder.

This Union Jack flag was taken from a government building in Singapore by a Japanese soldier, Sergeant-Major Uchiyama. It bears his name as well as the date of the British surrender in Japanese characters.

The flag was returned to the British in 1944 when a British officer, Captain John Hewlett Nunneley, discovered it in Uchiyama's bag in Burma after the Japanese soldier was killed in battle. It is on loan from the Council of the National Army Museum in London.

The diary of Singapore war hero Lim Bo Seng, written in English, contains his personal reflections about his wife and children, whom he had to leave behind in Singapore to lead the anti-Japanese war efforts in Malaya and other parts of Asia.

The original diary will be on display for the first time. It has also been transcribed and digitised in its entirety.

A version of this article appeared in the print edition of The Straits Times on September 19, 2017, with the headline 'Tales and things from WWII'. Subscribe
Topics:
More
Whatsapp Linkedin FB Messenger Telegram Reddit WeChat Pinterest Print Purchase Article Copy permalink