Forty years ago, the Sumatra-born, Singapore-raised and London-trained conductor helmed the orchestra's inaugural concerts in an air of anticipation but uncertainty with regard to its long-term viability.

The SSO's existence is no longer in doubt. This was largely due to Choo's pioneering work and hard graft and this concert was a microcosm of his musical convictions and philosophies. A specialist of 20th-century music, he fearlessly championed composers such as Stravinsky, Bartok and Shostakovich, then considered esoteric to local ears.

He also introduced to Singapore young talents including Lang Lang, Jin Li and Di Wu, when they were teenagers.

Stravinsky's symphonic poem, Song Of The Nightingale from 1919, inspired by Hans Christian Andersen's tale, ushered the evening to strains of full-blown Chinoiserie.

The unrelenting busyness and apparent chaos of its opening, full of biting dissonances and complicated by snarling cross-rhythms, were well handled. 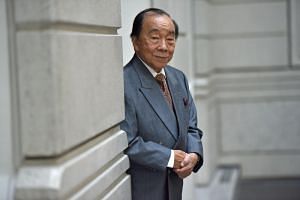 The punchy incisiveness of each beat in this ballet-like score was matched by excellent solos from the flute, oboe, violin and trumpet, each representing characters in the story, including live and mechanical songbirds.

Choo's sprightly leadership, a rebuke to his 85 years, was key to the music's inexorable sense of direction.

He was also more than quadruple the age of the soloist for Mozart's Violin Concerto No. 4, 19-year-old Chinese prodigy He Ziyu, a student at the Salzburg Mozarteum.

That the pared-down orchestra was a sympathetic partner to the youngster was a given.

Without mollycoddling soloists, Choo and his charges provided light and transparent accompaniment for He's confident and bright tone to shine through.

His playing was tasteful, notwithstanding the somewhat romanticised cadenzas, and the crystalline beauty came through best in the graceful slow movement.

The finale was a portrait of restraint and good teaching, with further virtuosity unveiled in his encore, Ruggiero Ricci's quiet but freakishly difficult transcription of Francisco Tarrega's guitar classic, Memories Of The Alhambra.

Bartok's early Orchestral Suite No. 1 of 1905 will not be classed as a quintessential work by the Hungarian modernist composer.

Although derivative in content and inspiration, its five movements nevertheless require a firm hand in guiding and shaping its Wagner-Straussian agenda.

SSO: Performing behind the scenes

Siblings play together in the SSO for almost 30 years

Darker in mood was the second movement, characterised by a fine cor anglais solo and impassioned string playing.

Also making a mark were the clarinet in the fourth movement and violin solos by co-concertmaster Lynnette Seah, the orchestra's first leader in those heady 1979 evenings at Singapore Conference Hall.

Rolling back the years, nostalgia and the poignancy engendered were not hard to fathom.

More importantly, Choo got the orchestra to do what he desired, projecting a clarity and vividness that made the trite music sound relevant, even vital. That is the true measure of a maestro.