Singapore fiction is making its way into not just established markets, but also vast new ones such as India and countries as far as Macedonia

Singapore fiction continues to make headway on international bookshelves this year, with a new slew of titles by home-grown authors set to go into the world. Meanwhile, a Singapore publisher makes a first foray into the British market.

Elsewhere, novels by literary veterans such as Suchen Christine Lim are making their way to not just established markets such as Britain and the United States, but also vast new ones such as India and countries as distant as Macedonia.

Singapore publishers already have a strong track record of exporting educational titles overseas, while local poetry has also made a name for itself abroad.

But global demand for Singapore fiction seems to have hit its stride in recent years, with titles such as Sonny Liew's graphic novel, The Art Of Charlie Chan Hock Chye, garnering international acclaim last year.

Singaporean writer Sharlene Teo Wen-Ning's debut novel Ponti, which is due next year, was acquired for a five-figure sum last November for Britain and the Commonwealth by big-name imprint Picador after a seven-way auction.

Teo's unpublished work, set in a haze-shrouded Singapore, bagged the inaugural Deborah Rogers Writers' Award last year in Britain. Its rights have also been pre-empted by Simon & Schuster in the US and sold to publishers in five other countries.

The new branch, set up last November, plans to bring out at least 14 titles by local authors this year and the next, starting in May with Jaswal's first novel, Inheritance, and first-time novelist Daryl Yam Qilin's Kappa Quartet.

Epigram founder Edmund Wee took out a six-figure bank loan for the venture, which he hopes could put a Singaporean novel in the running for the prestigious Man Booker Prize. Books must be published in Britain to be eligible.

Mr Wee has been going to international book fairs such as those in Frankfurt and London since he founded Epigram Books in 2011, but getting his foot in the door was not easy.

Harder to find success in Singapore

"It was very humiliating," he says. "People would refuse to give me more than two minutes of their time. They wouldn't even let me put my books on their table - they told me to just leave them on the floor."

This year will be different, he believes, as Epigram now has three London-based staff with decades of experience in the British market.

Jaswal, whose second novel, Sugarbread, will be brought out by Epigram UK in November, hopes her stories of Singapore's Punjabi community can broaden the simplistic impressions foreigners might have of Singapore.

"People largely think of Singapore as having only a Chinese population," she says. "Inheritance and Sugarbread both explore the experiences of minorities in Singapore whose narratives are often overlooked."

Yam, 25, calls it "strange and wondrous" to have a shot at being published in Britain. His novel is about a soulless Singaporean who meets a soul-stealing Japanese river demon.

"It is a lot like having your children tell you they're leaving home," he says. "All I have is a mixture of pride and sadness, and a constant sense of wonder as to how it'll live beyond me."

Local literary veterans such as Lim, 68, and playwright-turnedmystery writer Yu, 55, continue their streaks of success abroad.

Yu, whose Aunty Lee books - about a food-loving Peranakan sleuth - were published in Britain and the US, has a new detective novel, The Frangipani Tree Mystery, coming out in Britain this June. 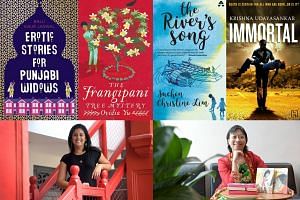 Lim's 2013 novel The River's Song, which is already published in Britain, was recently scooped up by Anita Nair's publishing house Attic Books after the acclaimed Indian author leafed through a copy at the house of Lim's agent, Ms Jayapriya Vasudevan, and was hooked.

Nair, 50, cites The River's Song as part of the inspiration behind Attic, which she launched last month to bring foreign literature to India's shores.

Although Lim's novel is about the transformation of the Singapore River, Nair believes it is something Indian readers will strongly identify with. "As a nation, we are not unfamiliar with gentrification."

Attic will be releasing an English edition of the book at the Times Literary Festival in Bangalore next month, while also translating it into Tamil and Malayalam.

Separately, it will be translated into Filipino to be taught in schools in the Philippines, a deal engineered by Singapore's National Arts Council (NAC).

The NAC has been investing more in the last four to five years to help Singapore literature go global - from increasing Singapore's presence at key international book fairs to publishing an annual rights catalogue for selected new prose.

National Book Development Council of Singapore deputy director Kenneth Quek says populist movements, such as We Need Diverse Books, have raised demand in Western markets for stories not set in the US or Europe.

He adds: "The US and British markets, while still quite large, have stagnated. Asia holds a large, somewhat untapped market and Western publishers are beginning to cater to it."

Other local publishers are looking closer to home. Ethos Books has had Malay Sketches, a story collection by Alfian Sa'at, translated into Burmese and is in talks to release the translation in Myanmar.

Ethos is also working on an Asean anthology of stories and poems with publishers from Indonesia, Malaysia, the Philippines and Thailand, to be released in all four countries and Singapore.

Other authors, such as designer Josef Lee, are taking less orthodox routes to overseas sales.

The 37-year-old has been illustrating whimsical short stories in his spare time for eight years, but found himself the centre of a crowdfunding campaign by Taiwanese lifestyle website FLiPERmag.com.

The campaign to publish his story, Wake Me Up At HappyLand, about an old man who travels the world in search of happiness, took off after the story went viral on website BoredPanda. Three weeks in, it has reached 46 per cent of its US$20,000 (S$28,600) goal.

The interest also helped him sell the rights for another story, The Boy Who Caught The Sea, to China children's book publisher Beijing United, with the book to come out in April.

Lee was surprised at the demand for his work overseas, especially as he freely posts all of it online.

"In China and Taiwan, when you go to bookstores, you see big crowds," he says. "In Singapore, we browse, but don't buy."

Some authors have found favour both locally and abroad. They include New York-based Cheryl Tan Lu-Lien, whose novel Sarong Party Girls has been on The Straits Times' bestseller list for four months and counting. But for many, there remains a disparity in fiction markets here and elsewhere.

Yet her novel, titled 3, sold just 300 in a year here, compared with 3,000 copies in three months in India - even though the story was about the quintessentially Singaporean legend of Sang Nila Utama.

"I suspect that we in Singapore view Singapore literature as something niche rather than mainstream," says the 38-year-old. "So if a reader wants to pick up an adventure-thriller, he might go for a more globally mainstream writer than someone local."

Should foreign acclaim be the yardstick for local literature? Publishers disagree. Singapore Book Publishers Association president Peter Schoppert says an overseas push should not come ahead of nurturing the local literary ecosystem.

"I sometimes get a little upset at the notion that only international success will validate Singapore literature," he says. "A healthy local literary publishing scene should be its own reward."

The valuing of international success over local, says Ethos associate publisher Ng Kah Gay, could be "an extension of our insecurity with smallness".

Local publishers and writers say they would welcome more support, such as more Singaporean texts taught in schools and better retail space for bookstores.

"Imagine what it would do for our culture if we had bookstores on the ground floors of our malls," says Epigram's Mr Wee.

Says author Lim: "Unless we dare to teach and see ourselves in our own literature, Singapore will remain a nation of cultural immigrants without a shared literary culture."

Mr Schoppert also believes that publishers must do more to reach younger generations.

"Young writers and readers have the whole world in front of them and are just as likely to put their energy into Tumblr poetry or fan-fiction as learning about local literature. We have to recognise that and move from there."

For more information, go to buysinglit.sg/