When Chng Kai Jin joined the Singapore Symphony Orchestra (SSO) as its general manager in early 2004, he had his work cut out for him.

The national orchestra had posted a deficit of about $6 million the year before and was struggling to fill seats in the 1,811-seat Esplanade Concert Hall, which has more than double the capacity of the SSO's home at the more intimate Victoria Concert Hall.

Mr Chng, 60, rolled up his sleeves and plunged into the fray. Now, 11 years later, he is leaving his position as general manager of the Singapore Symphonia Co Ltd - the company which operates the orchestra - with a spring in his step.

The 36-year-old SSO has moved back into the beautifully refur- bished premises of the Victoria Concert Hall, and hits a healthy average of 85 per cent attendances. There is still a buzz from the standing ovations it received at the prestigious BBC Proms classical music season in London last year.

Mr Chng is quick to side-step the praise, citing the orchestra's "great improvement", "strong and supportive" board and a "really good team" of staff as reasons for its success.

He says: "It wasn't overnight success. It was a long trajectory."

The seasoned arts administrator, who is leaving to pursue personal goals, will be staying on till September to work with the incoming chief executive-designate, Mr Chng Hak-Peng (they are not related), for a smooth transition.

Mr Goh Yew Lin, chairman of the Singapore Symphonia, said in a statement: "Kai Jin... has been unfailingly diligent in building the organisation, developing the orchestra's support base and significantly expanding its education and outreach activities."

The co-founder of Singapore's first classical music radio station, Symphony 92.4 FM, was in the broadcast industry for nearly 20 years before he joined the SSO. He has always been a passionate classical music advocate - he is a pianist by training and studied at the Ecole Normale de Musique de Paris in France. 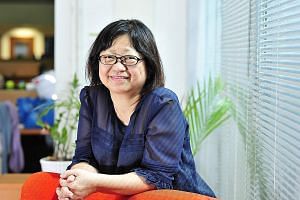 His early administrative goals were to get the orchestra financially secure and train the management staff. They now have a nearly 50-strong teamand the orchestra is no longer in the red. Their expenditure for this financial year is about $23 million, offset mostly by government funding and corporate and individual sponsorship. Box-office receipts contri- bute about 6 per cent in revenue; ticket prices - as low as $15 for a ticket - have been kept affordable to keep audiences coming.

Improving the orchestra was key to winning over more concertgoers. Mr Chng also helped develop subscription and membership schemes such as Friends Of The SSO.

Over time, superstar soloists and conductors were more willing to play with the SSO and many have cultivated a longer term relationship with the orchestra.

The orchestra has also built up a strong slate of international relationships through tours abroad. Next year, it will perform in Europe at the Dresden Music Festival and the Prague Spring International Music Festival.

Mr Chng recalls an anecdote from the mid-2000s, when he was trying to put together a regional tour of Europe. He wanted to have the orchestra perform in major European cities such as Berlin. A German agency, however, was not nearly as keen.

He recalls with a laugh: "The guy told me over the telephone, 'You're only a Singaporean symphony orchestra. You're not the Berlin Philharmonic. Don't tell me you want to perform in this city and not that other town.'

"I told everyone, look, we are going to be a better orchestra, but to go to Europe and America, we have to be nice to every single person. It was like a country girl had married into a rich aristocratic family in the city. You've got to be nice to your mother-in-law."

Eventually, the orchestra earned its stripes and, in 2005, made its debut at the renowned Lincoln Center in New York City, followed by a successful five-city tour of China and Taiwan in 2007 that garnered standing ovations in Beijing and Shanghai.

The same sort of deep-rooted relationships had to be built with private donors and sponsors as well.

Mr Chng says: "You've got to be fair to whoever supports you and whatever the support he gives you. I have to be very sensitive because the minute I'm seen as favouring one over the other, it will destroy the whole ecosystem."

As for his plans, the bachelor would like to take a break after nearly three decades of working in the arts and brightens at the thought of possibly going back to playing the piano or picking up a new language.

But it seems that he is already missed at the Singapore Symphonia. Senior programmes manager Kua Li Leng, who has worked with Mr Chng since he joined the company, says: "On the personal front, Kai Jin is one of those few people I know whose sincerity and openness easily win him many friends.

"At work, he is a true leader and the best I have worked with."

A version of this article appeared in the print edition of The Straits Times on July 14, 2015, with the headline 'Leaving SSO with spring in his step'. Subscribe
Topics:
More
Whatsapp Linkedin FB Messenger Telegram Reddit WeChat Pinterest Print Purchase Article Copy permalink