NYTIMES - The Metropolitan Opera fired conductor James Levine on Monday evening (March 12), ending its association with a man who defined the company for more than four decades after an investigation found what the Met called credible evidence that Levine had engaged in "sexually abusive and harassing conduct."

The investigation, which the Met opened in December after a report in The New York Times, found evidence of abuse and harassment "both before and during the period" when Levine worked at the Met, the company said in a statement.

It was an extraordinary fall from grace for a legendary maestro, whom many consider the greatest American conductor since Leonard Bernstein. The Met did not release the specific findings of its investigation, which it said had included interviews with 70 people. But the statement said that the investigation had "uncovered credible evidence that Levine engaged in sexually abusive and harassing conduct toward vulnerable artists in the early stages of their careers, over whom Mr. Levine had authority."

It said that it was terminating its relationship with Levine, who is currently the company's music director emeritus and the artistic director of its young artists programme. "In light of these findings," the statement continued, "the Met concludes that it would be inappropriate and impossible for Mr. Levine to continue to work at the Met." A spokesman for Levine said that he did not have an immediate comment.

Levine, 74, has become the highest-profile figure in classical music to have his career upended during the national reckoning over sexual misconduct. He made the Met's orchestra into one of the finest in the world, led the Boston Symphony Orchestra and the Munich Philharmonic and gained worldwide renown through recordings, telecasts and videos. His fame transcended classical music: He shared the screen with Mickey Mouse in Disney's Fantasia 2000, and made the cover of Time magazine in 1983, under a headline proclaiming him "America's Top Maestro."

Even before the accusations, the Met had been moving toward a post-Levine era. After years of ill health, he stepped down as music director two seasons ago. The company announced last month that Levine's successor, Yannick Nézet-Séguin, would take on his new role next season, two years ahead of schedule.

But his termination has dealt the Met a serious blow at a moment of vulnerability. The company, the largest performing arts organisation in the nation, costs close to US$300 million (S$394 million) a year to run, making it highly reliant on the generosity of donors - a dependence that has only grown as it has faced a box-office slump. Now the Met finds itself forced to court both philanthropists and audiences as it faces difficult questions about what it knew, or should have known, about its star conductor.

The Met suspended Levine and opened its investigation in December after The Times reported on-the-record accusations of four men who said that Levine had sexually abused them decades ago, when they were teenagers or his students.

Levine called the accusations "unfounded," saying in a statement that "I have not lived my life as an oppressor or an aggressor." But some questions arose early on about how the company had handled the case, including the fact that it began its investigation more than a year after Peter Gelb, its general manager, was first told that police in Illinois were investigating an accusation that Levine had sexually abused a teenage boy there in the 1980s. Gelb has said he briefed the leadership of the Met's board about the police investigation and spoke with Levine, who denied the accusations. But Gelb said that the company took no further action, waiting to see what police found.

The Met said that its investigation, which was led by Robert J. Cleary, a partner at the Proskauer Rose law firm who was previously a U.S. attorney in New Jersey and Illinois, had determined that "any claims or rumours that members of the Met's management or its board of directors engaged in a cover-up of information relating to these issues are completely unsubstantiated."

The accusations against Levine reported in The Times went back decades, and shared marked similarities. Chris Brown said that Levine had abused him in the summer of 1968, when he was a 17-year-old student at the Meadow Brook School of Music in Michigan and Levine led the school's orchestral institute. Brown, who went on to play principal bass in the St. Paul Chamber Orchestra, said that one night in the dorms, Levine had masturbated him and asked him to reciprocate - and then punished Brown when he declined to do so again, ignoring him for the rest of the summer, even when he was conducting him.

James Lestock, a cellist, said that he, too, was abused that summer when he was a student, and said that the abuse continued in Cleveland, where a tight-knit clique of musicians followed Levine, who was then an assistant conductor at the Cleveland Orchestra on the cusp of a major career. He said that at one point Levine had the group don blindfolds and masturbate partners they could not see. (Another participant confirmed this in an interview.) Lestock said Monday night that after carrying around the pain of those encounters for so many years, he had been moved to see a public acknowledgement of Levine's behaviour.

"The truth can be very useful," he said in a telephone interview. "The truth creates good." 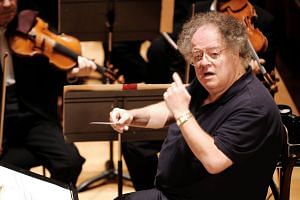 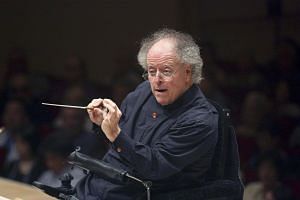 Albin Ifsich, who went on to have a long career as a violinist in the New Jersey Symphony Orchestra, said that he had been abused by Levine for several years, beginning at Meadow Brook and continuing after he joined the group of young musicians who followed Levine to Cleveland and later New York.

Ashok Pai said he had been abused by Levine for years, beginning in 1986 near the Ravinia Festival in Illinois, when he was 16. Pai grew up near the festival, where Levine was music director, and wanted to become a conductor. Three decades later - after, Pai said, therapy had helped him realise how destructive those encounters had been - he detailed his accusations in the fall of 2016 to the Lake Forest Police Department in Illinois.

Law enforcement officials said last year that they would not bring criminal charges against Levine, noting that while the state's age of consent is now 17 - and 18 in some cases - it was still 16 in 1986. Several performing arts institutions have been confronted with complaints about the behaviour of some of their leading artists.

A number of orchestras severed ties with conductor Charles Dutoit after he was accused of sexual misconduct, and the Boston Symphony, where he was a frequent guest conductor, later determined that the accusations of misconduct lodged by several women who worked for the orchestra were credible.

Peter Martins retired under pressure this year as ballet master in chief of New York City Ballet after The Times and The Washington Post reported accusations that he had been physically abusive. When the company's investigation was completed, however, City Ballet announced it had not corroborated the allegations.

Levine's focus on and influence over the Met was rare in an era of jet-setting maestros. He conducted more than 2,500 performances with the company, far more than any other conductor. Since suffering a spinal injury in 2011 that caused him to miss two seasons, Levine has conducted from a wheelchair. It was only with great reluctance - and after a battle erupted behind the scenes when performers complained that it had grown difficult to follow his conducting - that Levine stepped down as music director in the spring of 2016. That year he acknowledged that he had Parkinson's disease, which he had previously denied, and said that his difficulties on the podium were related to his medication.

Rumours about Levine and sexual abuse swirled throughout his career. Johanna Fiedler, a former press representative for the Met, wrote in her 2001 book "Molto Agitato: The Mayhem Behind the Music at the Metropolitan Opera," that such stories had circulated since at least 1979. "Each time, the Met press office would tirelessly point out the cyclical nature of the gossip and the complete lack of substance," she wrote.

In 1987, The Times reported that there were "conflicting rumours about his private life and an imminent resignation" without getting specific. Levine dismissed the stories in an interview with The Times, saying that he had been told years earlier that there were "reports of a morals charge in Pittsburgh or Hawaii or Dallas." "Both my friends and my enemies checked it out, and to this day, I don't have the faintest idea where those rumours came from or what purpose they served," he said at the time. Gelb said in earlier interviews with The Times that Met records showed two instances when complaints about Levine's behaviour had reached top company officials. In 1979, he said, Anthony A. Bliss, who was then the Met's executive director, got a letter from a board member asking about an anonymous letter containing accusations about Levine. Neither the board member's letter nor the anonymous one could be obtained, making the exact nature of the accusations unclear. But a copy of Bliss' response obtained by The Times shows that he dismissed them.

The second time, Gelb said, was the 2016 call he got from the Lake Forest Police, who were investigating Pai's account. It was a year later, in December, when the company learned from media inquiries that more accusers were coming forward, that the Met suspended Levine and opened its own investigation.