SINGAPORE - Chinese dancer Qiao Yang continues to take the stage well into her 50s, an endeavour captured in her solo piece, Almost 55.

It is a full-length autobiographical work created for the veteran dancer, who turns 56 this year, by Taiwanese choreographer Chou Shu-yi.

In monologues interspersed with dance solos, it traces Qiao's career from her start in traditional Chinese dance in the early 1970s to studying contemporary dance in Guangzhou in the 1980s to moving to Hong Kong in the 1990s.

The much-lauded performer has spent more than 23 years at Hong Kong's City Contemporary Dance Company (CCDC), won multiple awards and been listed in the Hong Kong Dance Hall of Fame.

Yet, she was taken aback when Chou, who is in his 30s, pitched the idea of such a solo to her. It premiered in Hong Kong in January last year.

"I didn't think there was much to say about my journey in dance," she says in Mandarin with a laugh over the telephone from Hong Kong.

Born in Shaanxi, China, she loved to dance as a child. When she was 12, her mother sent her to be an apprentice to a traditional Chinese dance troupe, fearing the child might otherwise be sent to the countryside to do hard labour, a fate that befell many youths during the Cultural Revolution.

At 24, Qiao made the switch to contemporary dance, joining the Guangdong Dance School in 1987 and later becoming a founding member of the Guangdong Modern Dance Company. 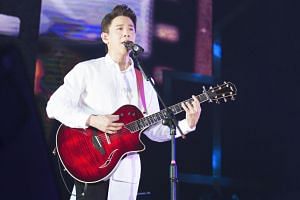 Huayi 2020: Why it has been seven years since Taiwanese singer David Tao's last album

Huayi 2020: Who was the killer? The audience gets to judge in Rashomon-style mystery play

Huayi 2020: Taiwan's Eve Ai will be 'very disappointed' if her music does not win awards in the future

Every dancer fears injury and Qiao has not been immune. She has had three major injuries in her career, including to her knee and waist.

Once, she was dropped by her partner during a lift and fell hard on the stage.

"I was in enormous pain, but that night when I performed, I felt nothing," she recalls.

"It was like fate was telling me it was not yet time to stop."

She is married to former Hong Kong Arts Development Council chief executive Chow Yung-ping. They have no children.

"But age isn't an issue for me - it's just a number. If you have a good physique and look after yourself, you could be dancing at 60."