Treasures Of The World From The British Museum exhibition, which opens at the National Museum of Singapore on Saturday (Dec 5), brings to Singapore's shores treasures from ancient civilisations spanning the world.

The 239 exhibits featured in the new blockbuster show collectively tell a story about human civilisation and cultural achievement across two million years of history.

Here are some highlights.

The oldest artefact in the exhibition and a masterpiece of the stone toolmaker’s art. Using another stone as a hammer, the maker would have used considerable force and accuracy to knock off flakes to create the thin, symmetrical shape, boasting edges with a consistent angle suitable for cutting and slicing.

First made in Africa, handaxes spread to South Asia, the Middle East and Europe about one million years ago and remained in use for another 750,000 years. No other item is known to have been made for such a long time and to have such a huge geographical reach.

One of the tallest treasures in the show, this is a curator’s pick. The Kwakwaka’wakw people of Vancouver Island, located east of New Zealand, made such giant anthropomorphic figures to welcome guests at special gift-giving ceremonies called winter potlatches ceremonies. These gatherings were held to celebrate important events in people’s lives, including birth and marriage, and also to honour the dead. At potlatches, tall sculptures are made to emphasise the wealth and importance of the chief, and are usually depicted with both arms raised in a gesture of welcome. Here, however, one hand is placed over the chest while the other hangs loosely at the figure’s side. This ambiguity suggests that this figure had a different function. 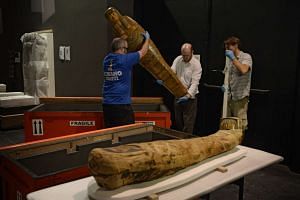 First look: Mummy from the British Museum uncrated for new show at the National Museum

The powerful West African kingdom of Benin, the capital of Edo State in southern Nigeria, is famous for its brass castings, and particularly for its relief plaques. These two plaques were probably produced in matching pairs to clad the wooden pillars of the royal palace in Benin City. The palace was the centre of political and religious activities that ensured the well-being of the entire Edo state. Some of the plaques portray important historical events while others depict scenes from court life and ritual. They are dominated by the imposing figure of the Oba, or the king of Benin. These are significant as they portray symbols of royal power and authority and are a visual record of life during those times.

Standing figure of the Buddha

Buddhism first spread to South-east Asia in the 1st century AD, carried into the region by traders and other travellers. Often portrayed seated, standing or reclining, such Buddha figures were made for veneration.

The seated Buddha figure is made of gilded lacquer, seated in the padsmana or lotus position, with both soles upturned and his right hand touching the earth. His gesture indicates the moment when the Buddha called on the Earth Goddess to witness his good deeds. To produce this hollowed figure, a clay core is shaped and covered with lacquer and left to dry. Once the core has been removed, the image is coated with refined lacquer before being polished and gilded.

The standing figure in silver with a bronze base is in the posture of discussion or teaching (vitarkamudra), and his left hand is held under his robes. Discovered at Sambas in Western Borneo, this is one of the earliest known sculptures from this area of South-east Asia and points to ties with India. Its material suggests it was made for a wealthy patron.

Throughout the world, crowns are worn to display power and wealth, confer distinction or signal higher spiritual power and insight. The paisley-shaped pendants on the front of this opulent crown from Nepal are embellished with images of Buddhist deities. Its size suggests that it may have been made for a child, perhaps a royal prince or a kumari. In Nepal, the practice of worshipping a pre-pubescent girl from the Newari community as a living goddess or kumari is closely related to royal legitimacy. In times past, the kings of Nepal received her blessing during an annual festival.

This intricate collar was discovered during excavations at the provincial cemetery of Matmar, in Middle Egypt. Composed of beads and amulets made of a glazed composition called faience, such amulets were intended to bring divine protection to the wearer, not only in life but after death too.

Embroidery is largely an urban craft in North Africa, particularly in the countries of Tunisia, Morocco and Algeria. It reflects the historical influences which have shaped the cultural development of the region. The influx of immigrant Jews, Andalusians from Spain, Turks and Armenians has contributed to the dynamism and evolution of diverse styles, designs and forms of dress. This exquisite knee-length tunic is worn by women on ceremonial occasions over a white lace blouse and pantaloons. It is from the coastal town of Hammamet in northern Tunisia and has a black wool base cloth embroidered with floral designs in gold-dipped silver thread and sequins. The deep neck is richly decorated with a thick horseshoe-shaped plait of gold braid bound with blue silk thread.

This dance mask or le op was collected on Mer Island in the Torres Strait Islands, which are culturally linked to Melanesia. Traditionally, each island carried out mortuary ceremonies around three months after the death of a relative. Masks worn during these ceremonies were understood to act as gateways to the spirit world. Styles of masks varied across the islands and each piece was made for a specific ceremony or dance. Imagery included human and animal features, as well as bird motifs and other specific clan designs. Today, traditions are being revived across the Torres Strait Islands and masks incorporating both traditional motifs and contemporary imagery are being produced and worn during festivals and community celebrations.

This bronze figure depicts the monkey king Hanuman, one of the most popular Hindu deities in India. Known for his great strength and military acumen, Hanuman has been worshipped by wrestlers, fighters and the military elite for centuries. His most notable quality is his devotion to Rama – an incarnation of the Hindu god Vishnu – whose wife Sita he helped rescue from the demon Ravana. Here, Hanuman is seen holding aloft a mountain of medicinal herbs. According to a story in the Hindu epic, the Ramayana, Hanuman was sent on a mission to the Himalayas to collect a magic plant in order to save the life of Rama’s brother Lakshmana. Unable to decide which plant should be picked, he uprooted the entire mountain and carried it to back to the battlefield on the island of Lanka where Lakshmana lay wounded.