When violinist Lynnette Seah is not practising for a concert with the SSO, she cooks and hosts for her private dining service

There is a twinkle in Lynnette Seah's eyes when she talks about food.

The acclaimed violinist and co-concertmaster of the Singapore Symphony Orchestra (SSO) is best known for her long list of musical accomplishments. But few know that her deft fingers are handy outside of concert halls as well.

Twice a week in her five-room Housing Board flat in Tiong Bahru, she hosts a dinner for between seven and 12 people as part of her private dining service, Lynnette's Kitchen.

On the menu on any given night is an array of Peranakan specialities such as homemade laksa sprinkled liberally with finely cut laksa leaves, sayur lodeh (mixed vegetables curry) cooked in a spicy coconut gravy and her signature beef rendang, which she slow-cooks for over three hours the day before to make sure the meat is fragrant and tender.

It was an SSO colleague who encouraged her to consider starting her own home-based dining service three years ago, having attended numerous dinner parties that Seah was known for holding after their concerts. It helped, too, that she had moved from Siglap back to her childhood neighbourhood of Tiong Bahru two years earlier.

"I have a wonderful wet market at my disposal where I can get all my fresh vegetables, fruit, herbs and meats," the 60-year-old says. "I have my favourite vegetable sellers, my go-to fishmonger. Everything I make is handmade and completely done from scratch."

When I play the violin, I have to be extremely focused and concentrate very hard to get each note right. In contrast, cooking allows me to be free - to trial and error to get the right taste and balance. For me, my passions are like yin and yang. I look forward to both and they both give me immense joy in different ways.

LYNNETTE SEAH on what she loves about her two creative outlets

She charges $120 a person for a seven-course Peranakan meal or a four-course Western meal. Though she had only a sprinkling of reservations in her first year, three years on, she holds one or two dinners every week and says that reservations need to be made at least one month in advance.

For the single mother of two grown-up sons, starting this new venture has been like discovering a brand-new passion project.

"I have always approached cooking like I approach my music - I use my imagination to produce it," she says. "When I hear a piece of music, I like to think about it, dissect it in my mind and play it back with my own touch. It is the same with food. I love tasting something new and trying to figure out what went into it and how I can recreate it with my own twist."

Her go-to reference is a well-worn green notebook that is labelled Brilliant Ideas. In it are all the recipes she has collected and experimented on over the years, complete with her tweaks and precise measurements.

Her original recipes include buah keluak fried rice and grilled Japanese squid, stuffed with shiitake mushrooms and sticky rice, and drizzled with a truffle-herb-and-chilli vinaigrette.

While music has always been her first love, food has always brought her immense happiness and joy.

Growing up, she recalls how her mother - a talented home cook herself - would serve her dinner only when she had finished practising her violin and piano after school.

"I think that is why food has always had a special place for me," she says with a laugh. "It was always something I looked forward to, it was like a reward after a hard day of work."

Hard work, of course, is something Seah is well accustomed to. Born to a classical pianist mother and an anaesthetist father, she recalls practising her craft for more than two hours a day from when she was six years old.

At 16, she won a scholarship to study at the artistic university, Hannover Hochschule for Music in Germany. Two years later, the homesick Seah decided to come back. She taught classes at Yamaha for two years before auditioning for the newly formed Singapore Symphony Orchestra in 1978.

She ended up being one of eight Singaporeans who were hired full time to be part of the inaugural orchestra of 60. The following month, given her skill in her craft, she was asked to take on the role of concertmaster in the SSO's first concert.

Since those early days, Seah has gone on to play nearly 2,000 concerts, including solo performances, in countries such as Germany, Switzerland and Sweden.

In 2006, she was awarded the Cultural Medallion by the late president S R Nathan, an accolade she considers one of the proudest achievements of her life.

These days, she has practice sessions with the SSO four times a week, for four hours a day, and she often practises on her own at home after that.

"Technique is important and I do not allow myself to make more than three mistakes when playing a concert," she says. "But for me, it is after performing so much over the years that I finally feel like I am only coming into my own now at 60. "

Still, Seah says her culinary venture could not have come at a better time. In many ways, her passion for food has helped her deal with having to retire from the SSO when she is 62, from a job she has held for 39 years now.

And besides the cooking, it is also the chance to host people in her home that she has really relished. As a child, she was an introvert who sought out music as an avenue to express her emotions. But after years of performing, she began to realise that being a musician can also be a very lonely existence. 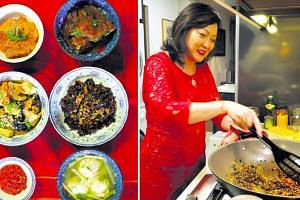 "When you are performing, you don't get to really interact with your audience. You play and then you leave," she says.

"But while hosting my dinners, I've had a chance to meet so many people, to hear their stories and get feedback, not only on my food, but often on my music from the many regular concertgoers who have visited me. It's been great."

It helps that she requires a reference before she accepts a dinner reservation - meaning guests are usually friends or friends of friends. She rarely has a bad experience hosting difficult or belligerent diners and, instead, conversations usually flow as freely as the wine in her cosy home.

Entrepreneur Tjin Lee, 44, visited Seah's home for a Peranakan dinner a year ago and says it was a great experience. "The best part was being able to dine with friends in a home environment without anyone having to do the cooking or washing up. Plus the food was excellent."

For now, Seah is happy to juggle her time between her commitments at the SSO and Lynnette's Kitchen. But she does dream of opening an eatery that would offer her array of Peranakan specialities on the menu.

She says: "If I can find the right business partner, I would love to be able to start a relaxed cafe one day - something that people can come to to enjoy a home-cooked-style meal and celebrate friendships."