Local dance troupe T.H.E Dance Company will be taking audiences on a backstage tour of the Esplanade's hidden spaces for its next production. The "back of house" spaces include the theatre workshop, basement, loading bay and cargo lift.

Impulse, choreographed by the company's resident choreographer, Kim Jae Duk, 31, is an exploration of "the spaces not normally seen by people outside the industry". He will also be composing the music for the piece.

The choreography, performed by eight dancers, is characteristic of his style, which company manager Jael Chew describes as possessing some "dark humour".

She says: "There is a sombre and serious atmosphere, but with certain witty or funny elements. There's also an innate musicality - even without music, you can almost hear a beat or rhythm to it. His movements are very grounded and weighty, almost animalistic.

"Interestingly, this time, Jae Duk will be adding steps from ballet, such as the entrechat and the pas de bouree. But his characteristic style is still there." An entrechat is a vertical jump in which the dancer crosses and beats the feet mid-air, while a pas de bouree is a running step on the toes.

Impulse opens on Oct 9. Audiences will meet at the Esplanade stage door on the mezzanine level.

Because the backstage spaces are used daily, rehearsal hours for the dancers have been starting late into the night and ending at 3am.

Dancing in non-traditional spaces also carries physical risks. The spaces are unlike theatre stages, which are usually constructed with sprung floors that help absorb impact and reduce injuries. 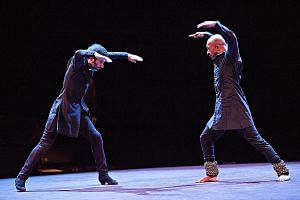 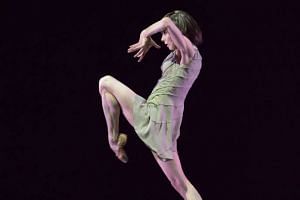 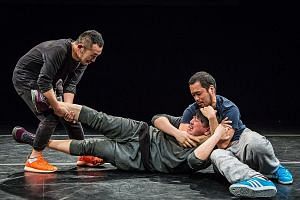 Beaten up on stage

To overcome these difficulties, the dancers have prepared themselves well. Evelyn Toh, a dancer with the company, says: "To prepare for the late-night rehearsals, many of us changed our daytime sleeping patterns so that we would be able to stay awake and alert during the night. We've also taken extra precaution for our bodies. To protect my knees, I've started to wear knee guards."

"I want them to feel the space in its true form. We're keeping the spaces as original as they are, even the lighting is simple. I hope people will immerse themselves and learn more about the internal dynamics and feel of the theatre."

T.H.E founder and artistic director Kuik Swee Boon, 42, says: "Dance can be so powerful. The way we play with space, energy and emotion can convey so much without telling a story."

Kuik says, referring to Israeli choreographer Hofesh Shechter, who also composes music for his pieces: "His ability to compose music from scratch makes him a rarity in the dance world. I like to call him the Asian Hofesh."

As a dance company, he says, T.H.E has evolved - while ballet still forms its foundations, the seven-year-old entity is hoping to define its style "in a unique way that relates to our Asian cultures and traditions and us as individuals".

Kim adds: "I'm exploring what it means to be Eastern. We want to find our niche, but we keep it very open and let our direction evolve naturally. We don't let it restrict us."