The Choir of the Transylvania State Philharmonic

In the world of classical music the change of music director or principal conductor is a major milestone. For the Singapore Symphony Orchestra (SSO), which just marked its 40th anniversary a week ago, it is a momentous occasion, as Lan Shui is only its second music director, and leaves after a tenure of more than two decades.

Few music lovers would have been surprised that Shui would choose Gustav Mahler's epic Second Symphony (Resurrection) for this farewell concert. Over the years he has moulded the SSO into an orchestra that excels in the late Romantic repertoire, and tonight's performance was a tour de force.

At the time Shui took over the reins of the SSO in 1997, its performance home was the Victoria Concert Hall (VCH), with vastly inferior acoustics to what is heard there today after the hall's extensive 2014 renovation. Ground-laying for the Esplanade -Theatres by the Bay complex had just taken place, and the SSO was a respectable but unremarkable small Asian orchestra.

The orchestra was already attracting high calibre guest artists, and had the knack of spotting future stars on the cusp of their breakthroughs. What remained frustrating for the symphonic enthusiast was that the orchestra's sound seemed to vary from week to week.

This was not helped by the fact that the undersized VCH often made listening to large orchestral works uncomfortably loud.

The orchestra's adaptation to the vastly superior Esplanade Concert Hall was not achieved overnight. Along with its excellent balance and supportive acoustics, the larger hall placed greater demands on orchestral timbre, balance and clarity, all of which Shui and his musicians worked hard to master.

This evening, the heady potion of adrenaline, passion, melancholy and hard toil brought forth a performance of Mahler's Resurrection Symphony that eclipsed the SSO's 2014 BBC Proms performance of Rachmaninov's Second Symphony by some margin.

The beauty and depth of sound, the precision, Shui's trademark shaping of long romantic lines made the 85 minute performance moving and unforgettable. Even with almost twice the usual numbers of winds in the orchestra, the ensemble was superb, with brilliant trombone, trumpet and horn solos.

The Singapore Symphony Chorus proved to be stars this evening, helming a combined choir that provided eleven ecstatic minutes of choral pianissimo through fortissimo.

The statuesque mezzo-soprano Anna Larson sang with such power and depth in the final two movements that many present might have believed that she was wearing a hidden microphone.Through the evening, the only minor weaknesses was some loss of tautness in the fourth movement and Miah Persson, whose otherwise fine soprano solos tended to be overshadowed by orchestra and chorus. 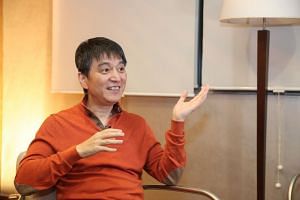 Over the quarter century since his first guest appearance with the SSO, Shui's youthful looks and slim build have remained largely intact. His boundless energy has not waned, even through periods of convalescence from injury. His contribution to classical music has been immense, and it is fitting that the Board of the Singapore Symphony Group has bestowed on him the title of conductor laureate. Farewell Lan Shui. Thanks for all the great music!