Instead, they have a bigger appetite for food delivery which, in turn, has revolutionised how restaurants and food preparers operate.

Take the case of Mr Guo Bonan, who has opened several branches of his 8Peppers spicy Sichuan-style restaurants in Shanghai since last year. But none has a dining room.

Instead, stationed outside each outlet are deliverymen on motorbikes waiting to whisk dishes to homes, offices and factories in the city of 24 million.

But it is also fuelling wider change by shrinking restaurants and reducing how often families cook at home while allowing millions to fry up meals in their own home kitchens and ship them to hungry buyers.

"In a rapidly developing city such as Shanghai, time is money. So people don't want to spend it cooking for themselves anymore," said Mr Guo, 29, adding that many younger people no longer learn to cook. 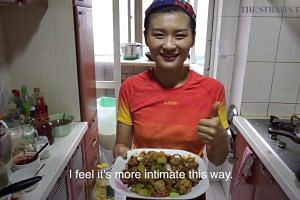 8Peppers focuses purely on delivery through leading platforms such as Ele.me and Meituan.

Business is good. 8Peppers has 10 branches and Mr Guo is a partner in a separate kitchen-only project with eight outlets and hundreds more planned nationally.

Passionate about food, the Chinese are also eager adopters of e-commerce, a potent combination for delivery start-ups.

More than 200 billion yuan (S$42 billion) worth of meals were delivered last year, a figure that is expected to grow another 20 per cent this year, consultancy iiMedia Research said.

"Convenience and efficiency get the most attention, especially among Chinese born in the 1990s or 2000s," he added.

Ele.me is working on user-data systems that can help restaurateurs determine where to open for maximum sales, and testing delivery drones.

The industry impact will deepen, said analysts. "It will change restaurant design. Kitchen space used to be one-fourth of a restaurant. But restaurants are now becoming something like processing centres for delivery," said Mr Wang Yuke of real estate consultancy RET.

Then, there are those who found a new career.

Ms Su, 34, now grosses up to 3,000 yuan a day, an eye-popping take for most Chinese, by frying up Jiangsu specialities in her tiny home kitchen and handing them to blue-clad Ele.me deliverymen.

She can now afford a tutor for her daughter and has plans to buy an apartment, once only a dream.

Supermarkets have rushed to offer delivery and Alibaba in 2015 launched a new grocery chain with online ordering and delivery.

Alibaba and others also have launched initiatives to connect suddenly vulnerable mom-and-pop stores to delivery networks.

"That's the future. Some of these new apps will help mom-and-pop stores survive," said Mr Lannes.

A version of this article appeared in the print edition of The Straits Times on February 19, 2018, with the headline 'Chinese have big appetite for meal delivery'. Subscribe
Topics:
More
Whatsapp Linkedin FB Messenger Telegram Reddit WeChat Pinterest Print Copy permalink