If you described a Jenny Zhang story, it would sound like the bleakest thing.

The tales in the American writer's debut short story collection, Sour Heart, are filled with dreadful details: Chinese immigrants to New York living in miserable, cramped apartments where they wake up with cockroaches crushed between the sheets, haunted by memories of the Cultural Revolution and subject to racist abuse from their new countrymen.

And yet, for all that, they are also hilarious.

Says Zhang, 33, in an e-mail interview: "Marginalised people are often defined by the worst thing that happened to them and it's very dehumanising."

Chinese people, she feels, possess a scatological humour of the highest order, one that deserves literary recognition. "Sometimes we won't let women be dirty and perverse, or we won't let people of colour exhibit joy on their terms, or we want to see poor people as 'inspiring'. It's so limiting."

Born in Shanghai, Zhang went to New York when she was five to join her parents, who had moved there earlier.

She says she started writing as soon as she learnt English. The first thing she remembers was a short story about being separated from her parents in China.

In her first few years in New York, she did not think of herself as Asian because nearly everyone she knew was Chinese. "There were few white people and so I had no idea I was the 'other' or even what 'Asian' was," she recalls.

"It wasn't until I moved to a predominantly white neighbourhood that I began to see myself as 'other', that I began to be confused for every other East Asian ethnicity under the sun, that my last name and my face became an instant punchline."

Growing up, she was delighted to see the occasional Asian appear in books and films, from Japanese-American babysitter Claudia Kishi in the book series The Baby-Sitters Club to Hawaiian actress Tia Carrere as the love interest in Wayne's World.

Mostly, however, she had to learn to love works that "did not love me, see me, respect me or even consider someone like me human".

Before Sour Heart, Zhang, who is also a poet, tried unsuccessfully to get represented by an agent for 12 years, until she was approached out of the blue over Twitter by Lena Dunham, the creator of hit television show Girls.

Dunham first discovered Zhang's work through her poetry collection Dear Jenny, We Are All Find and remembers feeling "stunned, moved and - quite frankly - a little jealous".

Sour Heart went on to become the first title published by her Lenny imprint at Random House.

Sour Heart in Mandarin is "xin suan", which also translates to "sore heart" or "heartache". Zhang, who declines to reveal her marital status, says this is a coincidence, but a fitting one. 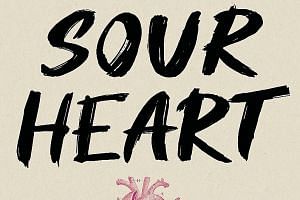 "I think these elements certainly are part of the collection - delicious pain, a sourness that isn't necessarily all bad, the enduring lifespan of trauma."

The writer, who is working on her first novel, has been vocal in the past about Asian representation in American literature.

In They Pretend To Be Us While Pretending We Don't Exist, an essay for Buzzfeed.com, she took white poet Michael Derrick Hudson to task for using an Asian-sounding pseudonym, Yi-Fen Chou, to give him an "edge" in getting his poem accepted to literary journals.

She says that more publishers are recognising that the reading public does not want to read books only about "bourgeois white people with marital problems". She adds, however, that despite this push towards diversity, the real power in publishing remains where it has always been.

"If you trace the money, it is still going into the same hands it's always gone to," she says.

What she wants is to make room for others like her.

"I hope my writing can begin to open up a space as wide as it has always been for white writers, one where a Chinese-American writer can write about anything and is not limited by the hyphenated modifiers that precede 'writer'."

A version of this article appeared in the print edition of The Straits Times on September 26, 2017, with the headline 'Bleak tales can be funny too'. Subscribe
Topics:
More
Whatsapp Linkedin FB Messenger Telegram Reddit WeChat Pinterest Print Purchase Article Copy permalink