Chinese-American Celeste Ng says she writes about race because as a non-white person, it is an issue she always thinks about

Growing up Chinese in the United States, Celeste Ng would get called a "chink" by boys in the playground. In the grocery store, adults looked at her and pulled their eyes into slits. At a bus stop, a homeless man shouted at her to "go home to Vietnam, go home to Korea".

"Those are the sorts of things that everyone in America who is not white experiences," says the 37-year-old author.

Born in Pittsburgh to Hong Kong immigrants, she made herself a name to watch when she topped the Amazon Book of the Year list in 2014 with her debut novel, Everything I Never Told You, a literary thriller set in the 1970s, in which the middle daughter of a mixed- race Chinese-American family is found drowned in a lake.

While her sophomore novel, Little Fires Everywhere, does not have Chinese-Americans as its main characters, race relations remain an important part of the narrative.

"Race is something I am probably going to write about," Ng says over Skype from where she lives in Cambridge, Massachusetts. "It is always on my mind as a person of colour, looking from the outside in, as opposed to the inside out."

In Little Fires Everywhere, she returns to her childhood home of Shaker Heights, Ohio, a pleasant, leafy suburb where residents make it a point to express how progressive they are. 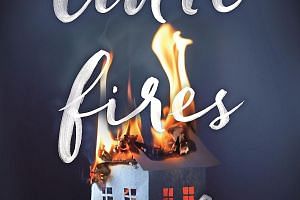 These little fires have been burning for a very long time and now they have grown into a giant fire that we have to work together to put out.

Ng loved growing up in Shaker Heights, but as an adult, she began to realise that there were blind spots even in her beloved community.

She teases these out in fiction, shaking up the Shaker Heights of her novel with an adoption scandal: A white couple in the neighbourhood has adopted an abandoned Chinese baby, but the mother, an impoverished waitress, has now come forward to claim her child.

"The people in this suburb can think they're race-blind and open-minded," says Ng. "But we see how these principles go out the window when they're becoming uncomfortable, and the Chinese- American mother and her baby make them uncomfortable."

Unlike Shanthi Sekaran's novel Lucky Boy earlier this year, in which an undocumented Mexican immigrant fights an American couple for custody of her son, Ng's story is not based on a real case, although she does recall a white couple adopting a Chinese baby while she was in high school.

"Would they be able to bring her up with some knowledge of her birth culture?" muses Ng, who is married with a six-year-old son. "Could they provide her with the emotional support she would need? Or would that be lost?"

Growing up, she recalls there was a dearth of books that featured Asian characters. Those that did were mostly about the immigrant experience, which she could not identify with.

Her mother was a chemistry professor and her late father a National Aeronautics and Space Administration physicist. The US is the only home she has ever known, even though most Americans still stumble over her surname - to the extent that she made her Twitter username @pronounced_ing.

When she started out, she was concerned about being pigeonholed as an Asian-American writer, in the vein of Amy Tan's seminal 1989 novel The Joy Luck Club.

"For a time, it was like that was the only narrative that was allowed, the kind of mystical, slightly exoticised experience that many Americans saw when they looked at us," she says. "Bamboo leaves, lotus flowers and ghosts."

But The Joy Luck Club has also been a wedge that opened up space for more voices, she adds.

After Everything I Never Told You came out, her fears were allayed as non-Chinese readers came up to her to say she had captured their relationship with their mothers perfectly.

"Now I identify even more as a Chinese-American writer," she says. "I'm more vocal and less afraid of being pigeonholed."

She gestures at the riots in Charlottesville, Virginia, last month, when white supremacists clashed with anti-racist demonstrators. One woman was killed when a suspected white nationalist crashed his car into protesters at the rally.

US President Donald Trump's policies will affect all people of colour, Asians among them, says Ng. As a Chinese-American writer, she feels it is her responsibility to support the struggles of those of other races. "These little fires have been burning for a very long time and now they have grown into a giant fire that we have to work together to put out."