A new pop-up showcase called The ARTery has been set up to display works from exhibitors left stranded by the sudden cancellation of Art Stage Singapore - the country's main contemporary art fair.

Organised by non-profit group Art Outreach with help from the National Arts Council (NAC), Singapore Tourism Board (STB) and Economic Development Board (EDB), the event will run at a hall in the Marina Bay Sands Expo and Convention Centre from Jan 24 to 27.

Art Stage Singapore was supposed to have run during the same period in what would have been its ninth edition. However, organisers cancelled it last Wednesday, just nine days before its public opening, citing poor local sales and "unequal competition".

According to the Art Stage website, more than half of the fair's 45 exhibitors are from overseas. Since the cancellation, exhibitors - including those who have spent five-figure sums shipping their artworks to Singapore - have been left in limbo.

A number have found alternative venues to display their works as galleries, artists, commercial entities and even home owners stepped forward in a groundswell of support, with some even offering their space for free.

At The ARTery, each exhibitor will have to pay a nominal fee of $2,000 for a 30 sq m booth, which will come with standard entitlements such as lighting and hanging systems.

The space in Hall A of the Marina Bay Sands Expo and Convention Centre will be able to accommodate up to 20 booths. Eight galleries are confirmed so far, including London-and Hong Kong-based Tanya Baxter Contemporary and Seoul-based Galerie Gaia. 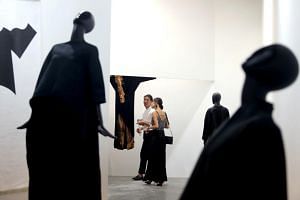 "We want to show that (after) what has happened, we can't leave our friends and guests in the lurch," Art Outreach chairman Mae Anderson told The Sunday Times.

She added that it will prioritise overseas galleries that shipped their works on or before last Wednesday.

"We are receiving inquiries from exhibitors and would like to extend assistance to as many as possible, especially galleries whose works have already arrived in Singapore," Ms Anderson said.

"However, there are resource constraints and we may not be able to cater to all requests for a booth. We seek their understanding and are trying to meet the requests as best as we can, given the short timeline, by exploring all options."

The pop-up showcase is supported by Marina Bay Sands, with help from the NAC, STB and EDB - the three agencies have backed Art Stage Singapore since its first edition in 2011.

A Singapore Art Week shuttle bus moving between Marina Bay Sands, National Gallery Singapore and Gillman Barracks will be available at selected times between Jan 25 and 27.