Without a point of view, action comedy Gringo cannot come to life despite a capable cast

The story: The world of mousy pharmaceutical executive Harold (David Oyelowo) is shattered when he discovers ugly truths about his best friend and boss Richard (Joel Edgerton). A business trip to Mexico by Harold, Richard and another company director Elaine (Charlize Theron) leads to a run-in with a cartel, a kidnapping and the unearthing of more secrets.

Action comedies can be packed with action and comedy, but without a strong point of view, they feel trivial, a lot of busyness with little to show for it.

That problem plagues this project. It boasts an impressive A-list roster of talent, each one doing his or her utmost to breathe life into a tightly plotted but shallow screenplay.

Harold is the Nigerian immigrant living the American dream - great job, loving wife. But he is a sheep among wolves; the other characters view his trust in them as a weakness.

He keeps a tight rein on the camp. When Richard and Elaine are at their most evil, when they are talking trash or hatching plots, the tone is curiously low-key and realistic.

Elaine, a sociopath who humiliates anyone lower on the power ladder, lets her mask slip now and then to reveal her frightened inner self. Other than to show that Theron has range, the story value of showing her humanity is doubtful.

The effort should have been spent on selling the plausibility of a friendship between Harold and Richard. Richard despises weakness and Harold, in his eyes, is nothing but. 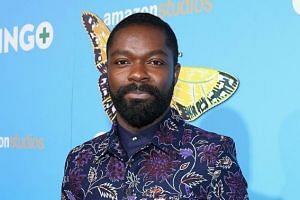 Charlize Theron: The boss with no rules

Their unlikely bond forms the backbone of the movie, which suffers as a result.

It is interesting to speculate how the screenplay might have been interpreted by different directors.

What each of them has is a point of view, a talent for adding the ingredient that brings a crime comedy to life.

It is a quality this project sorely needs.