I was one of the motorists caught in the jam in the Kallang-Paya Lebar Expressway (KPE) tunnel when a taxi caught fire on Tuesday evening (Fire in KPE tunnel leads to evacuation; Aug 30).

I was driving towards the Tampines Expressway when the public broadcast system, both on the radio and in the tunnel, asked motorists to abandon our vehicles immediately and to rush for the nearest exit.

Panic-stricken people scrambled to get to the exits while some parents struggled with their young children as they tried to avoid speeding cars to get across to the other side of the highway.

There were no police officers to control the traffic. I had to pull back a young girl from being hit by a vehicle as her father struggled with his three other children. 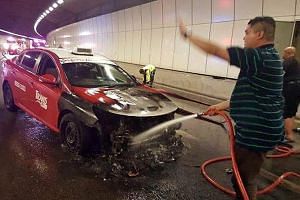 After several attempts, I finally managed to get through the police 999 hotline for assistance and to check if it was a drill or a real threat.

The officers were clueless, and it was only about 10 minutes later that they got back to me to say that a car had caught fire and drivers on the KPE had to leave the tunnel immediately for their own safety.

There was poor communication by the authorities - poor performance by the emergency services, and the police hotline was difficult to get through and police were unaware of the incident.

Had this been a more serious incident, the outcome could have been disastrous. The emergency services looked like they were not equipped to handle an emergency.

This is not the first time a vehicle has caught fire in an expressway tunnel. I would think the emergency services would have the experience to manage such a situation effectively.