My grandmother died a year ago at the age of 93. However, until now, we are still facing difficulties in trying to claim her Central Provident Fund (CPF) money.

My grandmother had a will, but the CPF Board said that it does not accept wills as CPF is not considered part of the deceased's estate.

We therefore had to prove our relationship to my grandmother. My grandparents did not have a marriage certificate so we submitted a grant of probate, dated 1978, to prove their relationship instead. 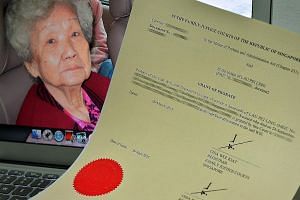 Sisters give up bid for grandma's CPF money

CPF monies not covered by a will

But the CPF Board said this was not valid.

Initially, we were informed verbally that we could at least claim for the funeral expenses. This was later retracted.

After many hurdles, we decided to let my grandmother's brother claim the CPF money.

Why can't the board be more flexible in cases like ours, especially if there is no dispute to the claim?