German payments firm Wirecard's entities in Singapore are required to keep customer funds from their activities in banks here, pending their application for a licence, said the Monetary Authority of Singapore (MAS) yesterday.

The regulator said it has received a licence application from Wirecard under the Payment Services Act, which provides for a grace period for entities conducting regulated activities to apply for the relevant licence. During such a time, MAS may issue requirements to the entities and allow them to carry on with regulated activities.

The Payment Services Act came into force on Jan 28 and is aimed at safeguarding against money laundering and terrorism financing, as well as strengthening consumer protection in the use of e-payments.

Wirecard declined to comment when contacted by The Straits Times.

MAS' statement came just before German prosecutors announced yesterday that Wirecard's former chief executive Markus Braun had been detained on suspicion of market manipulation, after the company admitted that €1.9 billion (S$3 billion) missing from its accounts likely "do not exist".

Current investigations show that "the conduct of the accused justifies the suspicion of inaccurate presentation concurring with market manipulation", prosecutors from Munich said in a statement.

Mr Braun, who resigned from Wirecard last Friday, turned himself in on Monday evening. He is suspected to have artificially inflated Wirecard's balance sheet and the company's revenue to make it look more attractive to investors and clients, with the help of others.

Wirecard is holding emergency talks with its banks, which are owed roughly €1.75 billion, to avert a looming cash crunch triggered by the missing money, it said.

On Monday, the one-time investor darling withdrew its preliminary financial results for last year and the first quarter of this year. Auditor EY refused to sign off on the payments processing player's 2019 accounts over the missing $3 billion.

EY was unable to confirm the existence of that amount in cash balances on trust accounts, representing about a quarter of Wirecard's balance sheet. 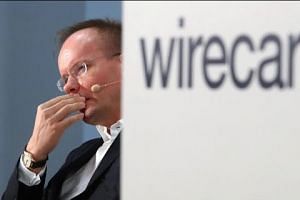 Wirecard says missing €1.9b likely do not exist; withdraws results

Former board member and chief operating officer Jan Marsalek's firing was also announced on Monday. He had been in charge of overseeing daily operations, including in South-east Asia, where the possible fraud occurred, German news agency DPA reported.

A source told wire agency Reuters that Wirecard is also looking at the sale or closure of parts of its business, but its creditor banks are not interested in a fire sale, especially as litigation risks may put off buyers.

Wirecard started out handling payments for adult entertainment and gambling websites, and has progressed to processing payments for companies including Visa and Mastercard.

It operates as an issuer of both real and "virtual" payment cards, and had marketed itself as a universal payments platform in a position to profit from the growth in digital payments.

Prosecutors said in March last year that eight Wirecard subsidiaries were under investigation in a criminal probe of suspected forgeries, falsified documents, money laundering and round-tripping of funds to support false transactions that were believed to have taken place between 2014 and 2018.

Round-tripping is where sales and profits are faked by sending money to a third party, who then uses it to buy goods and services from the sender in a pretence of real commerce.