Some firms screen resumes with machines, others use chatbots for preliminary interviews

Recruiting a staff member has always been an intensely personal interaction of interviews and "get to know you" sessions, but robots are now muscling into the process.

Some firms in Singapore screen a jobseeker's resume with machines, while others use chatbots to conduct preliminary interviews. Artificial intelligence (AI) may seem impersonal but it is speeding up the hiring process amid a manpower crunch - and attempting to make subconscious biases a thing of the past.

Despite recent setbacks with e-commerce giant Amazon ditching its AI recruiting tool - it turned out that it favoured men for technical jobs - more companies here have been working to automate parts of their recruitment process.

DBS has been using a new virtual recruiter to hire employees since April. The system has screened about 1,000 candidates and helped hire almost 300 new employees.

"There was a business need to hire 40 per cent more wealth planning managers this year, and the previous hiring model would not have been able to efficiently support our growth plans," said DBS head of talent acquisition James Loo.

DBS will expand its use of the system to hire wealth planning managers and relationship managers in markets such as Hong Kong and China. The tool will also screen its 2019 batch of management associates - a process where 7,000 or so candidates vie for 20 positions. 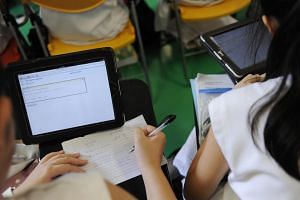 12,000 to benefit over next three years from two new AI training initiatives

Recruiters spend up to 20 per cent of their time collecting information and responding to e-mails before meeting shortlisted candidates, so DBS' new system saves staff up to three months worth of work in a year, said Mr Loo.

Singtel uses its bot to assess if candidates have qualities like leadership.

Impress.AI is not the only firm whose software is being used by firms here. In January, tech firm AnyMind Group launched a machine-learning system that can analyse resumes and jobseekers' social media accounts using semantic analysis and by processing natural language, to help match them with businesses looking to hire. About 30 Singapore clients have signed up to use the software, said Mr Sho Kondo, head of AnyMind's AI-driven recruiting platform TalentMind. It has about 180 subscribers worldwide.

"The system will scan the words used, give a masculine versus feminine score and suggest how recruiters can make their wording more gender-neutral," said Mr Khor Chern Chuen, SAP's managing director for Singapore. He added that it can also make salary recommendations based on historical data and potentially, external sources, so as to prevent recruiters' inherent biases from affecting offers made.

While Amazon, which had been building programs since 2014 to review resumes and automate the search for talent, suffered a setback when its system failed to rate candidates in a gender-neutral way, Impress.AI co-founder Sudhanshu Ahuja remains optimistic about using AI in recruitment.

His firm's software does not base recruitment decisions on a client's past hiring patterns, he said, adding: "We have built a unique rating system that allows the recruiter to rate answers for a competency or question without seeing any biasing information about the candidate, such as gender and race."

But ManpowerGroup Singapore country manager Linda Teo warned that even as technology reduces time and costs in hiring and improves accuracy in identifying candidates for a job, recruitment still needs a human touch.

ManpowerGroup has a tracking system that can sift through applications and build a database for future needs. Jobseekers may try to game the system by predicting keywords recruiters look for, such as "search engine optimisation" for a marketing role, even if they have no related experience, said Ms Teo.

But she said "employers have to use AI responsibly and use only information that jobseekers have explicitly provided for their job applications, and not information from their personal social media accounts".

A version of this article appeared in the print edition of The Straits Times on December 12, 2018, with the headline 'Virtual recruiters keeping an AI out for talent'. Subscribe
Topics:
More
Whatsapp Linkedin FB Messenger Telegram Reddit WeChat Pinterest Print Purchase Article Copy permalink