BANGKOK (REUTERS) - Thailand's shares and the baht currency looked set to rise on Monday (March 25) after partial results from Sunday's (March 24) general election showed a pro-army party ahead of the populist party leading a "democratic front" in the first vote since a 2014 coup.

The prospect of continuity, with the possibility of junta chief Prayut Chan-o-cha staying on as prime minister, should reduce uncertainty in Southeast Asia's second-largest economy and encourage foreign fund inflows, analysts and fund managers said.

"While this seems to leave the political situation in a non-conclusive state ... the elections have gone rather smoothly," said Mr Kobsidthi Silpachai, head of capital markets research of Kasikornbank.

"Local markets are expected to exhibit some risk-on behaviours with the currency enjoying some upside as it will monitor how negotiations will form the next government," he added.

With 93 per cent of overall votes counted, the Election Commission reported the pro-military party Palang Pracharat, which is seeking to keep Mr Prayut in power, was leading with 7.59 million votes.

The commission said the unofficial results, with 95 per cent of the votes counted, will be announced on Monday.

"If the Palang Pracharat Party joins hands with the Democrat Party and a few others, it will strengthen the baht and we will see foreign funds flowing in," said Mr Jittipol Pruksamethanon, chief strategist of Krung Thai Bank. 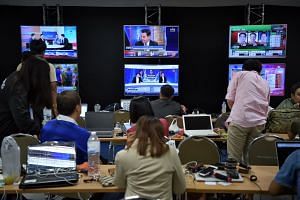 Institutional investors, who are in defensive mode, will be more confident in investing in the market, said Mr Narongsak Plodmechai, chief executive officer of SCB Asset Management, which has 1.5 trillion baht (S$64.1 billion) under management.

The baht has strengthened 2.75 per cent this year, the best performing currency in Southeast Asia.

Thailand's benchmark stock index is up 5.3 per cent this year, but foreign investors have dumped shares after last month's surprise, short-lived entry of the king's sister into politics threw the election into turmoil.

They have sold 11.2 billion baht net of shares this year, after unloading a record 287.5 billion baht worth in the whole of 2018.

Foreign investors have sold 37.3 billion baht of Thai bonds this year, after buying 134.7 billion baht in 2018.

"But in the medium term, we could see Thailand return to extended political instability if Prayut cannot maintain the confidence of the lower house, where he is unlikely to command a majority," he said.