The Inland Revenue Authority of Singapore (Iras) pulled in bumper tax revenues of $50.2 billion in the last fiscal year, up 6.8 per cent from the year before.

Economists said a sharp pickup in gross domestic product (GDP) growth last year and the start of this year, as well as a nearly 50 per cent surge in stamp duty collections fuelled by increased property transactions and collective sales swelled the taxman's coffers.

Iras chairman Tan Ching Yee pointed to a 3.6 per cent expansion in Singapore's growth last year, which outstripped 2016's 2.4 per cent growth. The better-than-expected economic performance, coupled with a low unemployment rate of 2.2 per cent, contributed to higher tax collections this year, she said.

Iras' collections accounted for 66.2 per cent of government operating revenue and 11.1 per cent of GDP, or economic output.

OCBC Bank economist Selena Ling said GDP growth "picked up significantly in 2017, and growth in the first half this year was even stronger, so the healthy corporate income tax collections are likely a reflection of real economic activities".

The total collected was $27.2 billion, 6.3 per cent higher than the previous year, due largely to higher corporate income tax collections. Healthy earnings helped lift those receipts by about 10 per cent to $15 billion. 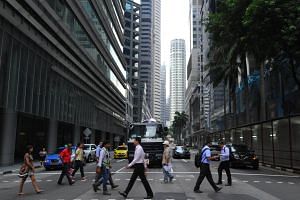 Fewer top earners but taxes they pay have gone up

Stamp duty collections surged nearly 50 per cent to $4.9 billion, thanks to a rise in property transactions and collective sales activity kicking into high gear. Property tax collections were consistent with the previous year at $4.4 billion.

"The property market was really buoyant, likely driven by en-bloc fever. This probably partially contributed to why the policymakers felt compelled to implement cooling measures in July this year," said Ms Ling.

But economists warned that the latest round of cooling measures which started on July 6, which raised ABSD rates on the second and subsequent purchases of residential property, has slowed transactions and could affect stamp duty collections for the next fiscal year.

The cost of collection stayed low at 0.84 cent per dollar collected. In financial year 2017/2018, Iras uncovered 10,726 non-compliant cases and recovered about $384 million in taxes and penalties through audits and investigations.

Goods and services tax collections were flat at around $11 billion, while betting taxes, which comprise betting duty, casino tax and private lotteries duty, totalled $2.7 billion, also unchanged from a year ago.

Tax collections for the next fiscal year may grow more slowly as "there are already signs that growth is starting to slow this third quarter, as the tech cycle fades and supply chains face disruption from the escalating US-China trade war", said Maybank Kim Eng economist Chua Hak Bin.