Prime office rents turned in a robust performance last year after a lacklustre 2017, according to data out yesterday.

Rents in the central region rose by 7.4 per cent, a marked improvement from the 0.4 per cent increase in the preceding 12 months.

The rise came in spite of the fourth-quarter performance, when rents rose just 0.5 per cent quarter-on-quarter, well down on the 2.5 per cent hike recorded in the third.

Net absorption, which measures the amount of new space leased by tenants minus the space vacated, is a key indicator of a property market's momentum.

More than 90 per cent of this activity last year was in the downtown core region, with tenants signing leases in new projects, leaving vacant space that was then filled by other occupiers. 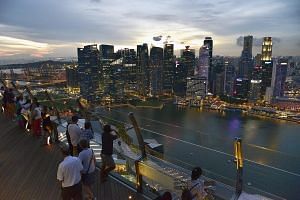 There was also strong leasing activity from a broad range of industries and co-working operators.

But the higher rents of central region offices could hit demand.

Mr Desmond Sim, CBRE's head of research in Singapore and South-east Asia, said tenants continue to head to newer and higher-quality developments. The trend was mirrored in a recent survey by Colliers International, which noted that some central business district (CBD) landlords regarded these developments as a key challenge.

Ms Tay agreed: "We foresee that office demand will spill out of the CBD in 2019, with newer developments located close to the CBD enjoying an edge over others."

The islandwide vacancy rate fell from 12.7 per cent in 2017 to 12.1 per cent at the end of last year, although on a quarter-on-quarter basis, vacancies inched up by 0.1 per cent in the last quarter.

This rise was due to new offices being finished in the rest of the central region, said Mr Duncan White, head of office services at Colliers.

But this also depends on how the economy here and overseas performs, said Mr Calvin Yeo, executive director and head of office advisory at Knight Frank Singapore, who predicts an 8 per cent to 10 per cent rent increase for prime offices this year.

Meanwhile, prime retail rents stemmed their decline a little, falling 1 per cent last year compared with a 4.7 per cent slide in 2017.

The numbers show that there is still underlying uncertainty in the sector despite an increase in retail sales and tourism growth, said Mr Sim.