SINGAPORE - After he heard the dreaded news in 2014 that the plant he was working in will be closed down, Mr Chua G.C., as he prefers to be known, put on a brave front at home, keeping the news from his wife and child.

But the anxiety would creep up and paralyse him in the middle of a meal.

Seized by fear, he would sit in silence for more than an hour, worrying about the future, especially for his school-going children, now aged 18 and 15.

The manufacturing company will completely shut its operations later this year and Mr Chua will be without a job for the first time since he started working.

Worse, he is worried he will not be able to get another job paying equivalent pay, given his age. 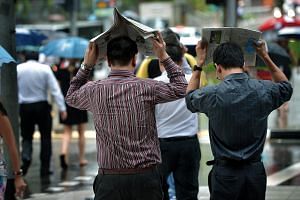 Mr Chua, who has a degree in chemical engineering from the National University of Singapore and has worked in the plastics industry for over 20 years, was a manager at a plastic production firm earning between $8,000 and $10,000 a month.

He has not received a single firm offer since he started sending out resumes in October last year.

"I'm not very hopeful about (my) job prospects due to the economic slowdown. I'm just hoping that from June, the economy will be better," said Mr Chua, who is in his late 40s.

And even though his wife continues to work, earning about $6,000 on average a month, the family has had to cut down on their expenses.

The family eats out less, spends less on luxury goods, and is not thinking of going for a holiday any time soon. Mr Chua said they have managed to save about $1,000 a month this way.

"I just want to finish my next job peacefully and see my children through their education, that's all I'm looking for," he said. "It's very stressful not be able to find a job these six months. It's especially so for mature workers who have a home, a car loan to service, children who are still going to school, maybe parents who are sick.

"Imagine you are already 45 and you go for an interview just like a fresh grad and you need to go and sell yourself, the feeling is not nice."