Governance has bigger impact in small states, affecting not only politics but other areas

A stable transition of political leadership is important, especially for small countries like Singapore where governance has a greater impact, said Law and Home Affairs Minister K. Shanmugam.

He made the point yesterday to about 200 people at an event on corporate governance, organised by the Securities Investors Association (Singapore), at a time when the Republic is transitioning to its fourth-generation leadership.

He then set out the ruling People's Action Party's (PAP) longstanding approach to selecting the country's future leaders, in a speech that covered leadership succession, populism and inequality.

The PAP's approach is to not leave it to chance but to bring in potential leaders early - preferably in their 30s or early 40s - and try them out in different ministerial portfolios and party roles, he said.

The current crop of fourth-generation leaders have to choose who among them is primus inter pares - first among equals, he added.

Governance is one reason for this approach, Mr Shanmugam said. Another important reason is the assumption that people in Singapore, including politicians, are similar to people elsewhere - which means they can be driven by ambition to want the top job for themselves.

"How do we try and reduce that (likelihood) and make them work as a team?" he said.

GETTING THE TEAM'S CONSENSUS 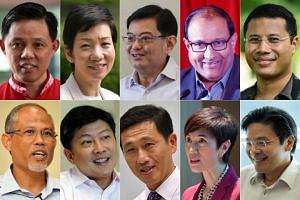 Coming of age: 3 ways Singapore's 4G leadership transition may be different from the past

But selecting a leader this way without consensus from the team could lead to leadership challenges, which has happened abroad.

Mr Shanmugam cited Australia, which has seen six prime ministers in the past 10 years. In the Singapore system, there are two ways of taking over power, and these are similar to that in some countries, he noted.

The first is via the PAP's internal elections to elect a central executive committee (CEC).

He noted that in Singapore, each minister typically anchors a group representation constituency (GRC) with several MPs.

"The cadre members are usually based on branches so... if you don't like the prime minister, within Cabinet if you can get about seven to eight ministers on your side, it's a fair bet that they will be able to swing their cadre members from their branches and their GRCs," he said.

"So then you form a team either quietly, as happened in the early 60s, or openly, and then you stand for elections at the CEC.

"And if you get the majority, and then you tell the prime minster you are no longer secretary-general of the party, please step down. That's how a coup takes place."

The second way, he said, is that under the Constitution, the person who commands the confidence of the majority of MPs becomes prime minister.

This is why the process of choosing Singapore's next leader is still ongoing, Mr Shanmugam said, to ensure the team comes together and works through "all the rough edges" before moving ahead.

The process reduces the likelihood of challenges, which "don't do the country any good", he added.

He noted that in a small country like Singapore, such leadership challenges will have a wide impact - on not only politics, but also other areas like the business environment.

On calls to let people elect the prime minister instead of the party or party's CEC, Mr Shanmugam said such a model "fails in so many places" around the world.

He warned that having open elections will result in posturing among the different contenders for the top leadership post.

"Each (contender) has got to present himself or herself in a way that appeals publicly. Do you think the others will then work for him when he gets elected or will they leave, and what damage does that do to the political psyche?" he said. "Is that sort of public posturing, that sort of public process, really good?"

He noted the person selected to be the next prime minister will have to face the general election.

"And then Singaporeans will have a say, and if you're not good, you will be out," he said.

Giving an update on where the leadership transition is at, Mr Shanmugam said the 4G team has been put through the paces and held a variety of ministerial portfolios.

"They still need a little bit more time with Singaporeans, so that Singaporeans can see them and assess them for themselves," he added.

The PAP will elect a new CEC at its party conference later this year, and Mr Shanmugam said the slate of candidates elected to the committee and the positions they hold will give an idea of where the transition process is.

Next year would be a very important year, he added, noting that PM Lee has stated his intention to step down by the time he turns 70, which is in 2022. "There's got to be a GE (general election) before that, and there's got to be some sort of indication to the public as to what the slate looks like in terms of the top leadership well before the GE," he said.

Looking ahead, he said the CEC election later this year as well as changes next year would give some indication of how things are working out.