Singapore and Britain signed three agreements in London yesterday that will boost collaboration in financial services.

One was a memorandum of understanding (MOU) between the Monetary Authority of Singapore (MAS) and the City of London Corporation to cooperate in facilitating data flows, enhancing cross-border know-your-customer processes, developing skills and promoting green finance.

The MAS and the City of London also signed a partnership arrangement on Britain's Green Finance Initiative to promote green and sustainable finance.

A third agreement - a declaration of intent - was struck between the Institute of Banking and Finance Singapore and Britain's Chartered Body Alliance to collaborate more in developing skills for finance and insurance professionals.

The signing ceremonies took place during the UK-Singapore Business Summit at the Guildhall in the City of London that was held to commemorate Singapore's bicentennial. 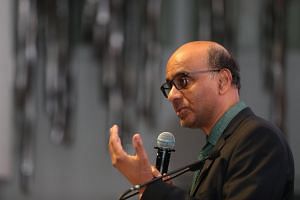 Progress was also made by the MAS and the Bank of England to increase cooperation in enhancing cyber security for the financial services industry.

Mr Tharman said: "The initiatives we are working on - data flows and governance, cyber security, skills development, and green finance - will enable continued dynamism and stability in Singapore's and London's financial centres."

The agreements also reflect the commitment of both nations to "free markets and multilateralism" - key traits that Mr Tharman cited in the summit's opening address, noting that they are "especially important in our future relationship and collaboration".

Mr Ong and Mr Tharman both emphasised the deep ties between Singapore and Britain, the shared history, strong friendship and cooperation across various sectors.

Mr Tharman noted: "Singapore and Britain are close friends with intertwined histories and a shared orientation towards the world. It is a strong base for our future partnership."

Mr Ong in turn highlighted areas for collaboration, which included financial cooperation, innovation, data and people-to-people exchanges: "This relationship will live on in the generations to come.

"It will simply be made more efficient and effective by the digital technologies that have made many things possible. Together, we will forge ahead in our cooperation for the new era."

Two panel discussions were on topics such as green finance, opportunities for partnership, and synergy between innovation and regulation.

The aim is to give enterprises insurance coverage for legal expenses that may be incurred in intellectual property infringement proceedings worldwide.

Mr Tharman was also conferred the Freedom of the City of London award yesterday in recognition of his efforts to strengthen ties between Singapore and London and for his significant contribution to global financial governance.

"I am deeply honoured and humbled," he said.

"We have worked to build new relationships... and to contribute to stronger global standards in many areas. I am confident our ties will continue to grow and flourish in the coming years."