Singapore plans to drive e-commerce and other wings of the digital economy within the region, when it assumes chairmanship of Asean next year.

This will be part of a larger push to help companies in the region expand, said Minister for Trade and Industry (Trade) Lim Hng Kiang, who sketched out a business- driven agenda that Singapore intends to deliver. For example, e-commerce rules could be streamlined and business costs slashed.

"During our chairmanship year, Singapore intends to pursue a set of tangible and meaningful economic deliverables," said Mr Lim, who was speaking yesterday at the Asean Conference 2017 at the Marina Bay Sands Convention Centre.

Singapore will assume the Asean chairmanship in 2018, taking over from the Philippines, and plans to tap into global mega-trends such as the burgeoning digital economy to help the grouping's businesses grow, said Mr Lim.

"We have identified e-commerce and other initiatives relating to the digital economy as a potential key priority for Singapore's Asean 2018 chairmanship," he told a gathering of 500 business leaders and officials. 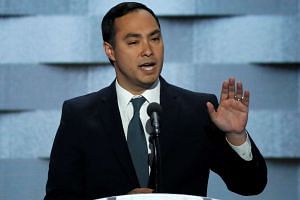 US House underlines value of ties with Asean

US 'must restore balance with other countries'

Singapore will use its chairmanship to streamline regional trade rules governing e-commerce, improve digital connectivity in the region and lower operational barriers to entry.

Mr Lim also said that Singapore intends to make trade more efficient by working closely with other Asean states to set up a self-certification regime. This will allow authorised exporters to self-certify that their goods meet Asean requirements for preferential treatment.

Another initiative on Singapore's to-do list is to implement what is known as the Asean single window. This will speed up Customs clearance via the electronic exchange of information across borders, facilitating the movement of goods and lowering costs for businesses.

Mr Lim said Asean member states have made significant progress in integrating their economies, even as he alluded to the rising tides of protectionist sentiment globally.

"The solution to sluggish global growth lies not in closing off markets, but keeping markets open for unimpeded trade and investment flows. To ensure Asean's value proposition, Asean has to continue building stronger economic connections within Asean and with the outside world."

"Six out of the top 10 markets that our members are keen to venture into are in South-east Asia, with Indonesia being the top market of choice," he added.

A version of this article appeared in the print edition of The Straits Times on May 05, 2017, with the headline 'S'pore to lead e-commerce push in region as Asean chair'. Subscribe
Topics:
More
Whatsapp Linkedin FB Messenger Telegram Reddit WeChat Pinterest Print Purchase Article Copy permalink