Unitholders were particularly keen to find out its strategy for the freehold Westfield Marion Shopping Centre in Adelaide and the rationale behind a private placement to partially fund the deal.

The Reit announced earlier this month that is planning to acquire a 50 per cent stake in Westfield Marion for A$670 million (S$620.2 million), with the other 50 per cent held by Scentre Group. The deal is expected to be concluded by the end of the year.

Westfield Marion is the largest regional shopping centre in South Australia with approximately 1.5 million sq ft of gross lettable area on a land parcel of 2.5 million sq ft. It is about 10km south west of Adelaide's central business district.

Dr Leong Horn Kee, chairman of the Reit manager, said the trust is taking a longer-term view of the asset. "We do have plans on how to further redevelop this area, (in the) medium to longer term."

He pointed to the size of the land and the potential for future enhancement.

The acquisition is being financed through a combination of proceeds from the $300 million of perpetual securities issued on Aug 30, debt as well as a private placement. The Reit's gearing will stand at 29.7 per cent after the acquisition.

One unitholder queried the choice for a private placement. SPH Reit units shed three cents to close at $1.08 last Friday after the Reit announced it had raised $164.5 million through the private placement. The issue price for the placement was $1.05 per new unit.

The placement allows the Reit to bring in more shareholders and improve liquidity, given the units are not very well traded, Dr Leong noted, adding that the placement was also priced such that the yield accretion was maintained. 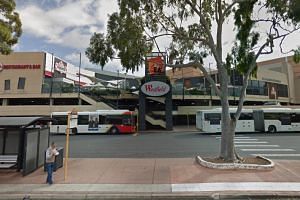 SPH Reit to invest in second Australian mall for $630 million

Singapore Press Holdings (SPH) holds a stake of around 70 per cent in SPH Reit.

During the hour-long session that was attended by around 175 people, one unitholder questioned the concentrated risk of having Paragon account for so much of the Reit's portfolio and asked if it would consider any mergers and acquisitions (M&A). At $2.75 billion, Paragon accounts for around three-quarters of the $3.6 billion valuation of the portfolio.

Dr Leong said: "Paragon is one of our mainstays. We put a lot of focus on Paragon, making sure it is well-managed and well-maintained. We continue to look at asset enhancement initiatives there."

He also highlighted that SPH Reit has been diversifying by acquiring The Rail Mall, Figtree Grove Shopping Centre and now, Westfield Marion.

The timing and pricing of a sale of the mall would have to suit SPH's own corporate objectives, with Dr Leong noting: "When the time comes that (SPH) are prepared to sell, we are prepared to look at it. We have to assess it based on our constitution."

All three resolutions, including one authorising the manager to issue units and to make or grant convertible instruments, were passed.