SINGAPORE - Singapore's Ministry of Trade and Industry has said that Singapore is committed to working with the European Commission to ratify the EU-Singapore Free Trade Agreement (EUSFTA) expeditiously and have it provisionally applied.

This is to enable businesses to utilise the parts of the agreement that are under the EU's exclusive competence, said the ministry on Tuesday (May 16)  in response to queries on the FTA.

"Singapore respects the internal processes of the European Union and look forward to the formal entry-into-force of the EUSFTA as soon as all EU Member States have ratified provisions under their competence," it added.

The agreement is a "pathfinder agreement" to an eventual EU-Asean FTA, said a spokesperson, adding that the ratification of the EUSFTA would " signal the EU's interest and commitment to engage a dynamic and fast growing region."

This would bring increased opportunities for both EU and Singapore companies in the EU and the region.

In a closely watched decision that was announced by the European Court of Justice on Tuesday, the court said that any trade deal that includes a non-court dispute settlement system would require ratification by the EU's 38 national and regional authorities.

"The free trade agreement with Singapore cannot, in its current form, be concluded by the EU alone," the court said. The Luxembourg-based court's rulings are binding and can't be appealed. This means that EU trade deals must endure a potentially bruising process of ratification by all member states. The decision will stand as key jurisprudence for future trade deals including any deal with Britain. 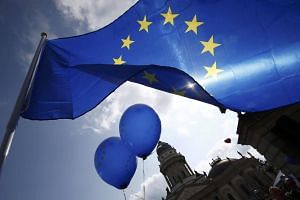 Singapore's trade deal with EU needs to be ratified by all 33 parliaments in bloc, top court rules

The European Commission and Singapore completed negotiations on a trade deal in October 2014. The commission, which negotiates trade deals on behalf of the EU's 28 members, saw the Singapore deal as a new standard that reflected bigger powers won by Brussels.

In the commission's big plans, the Singapore deal would have only required the greenlight of the European Council, which groups officials and ministers from the EU's 28 governments, and the European Parliament.

The judges said EU nations must also have a say on the Singapore pact because the EU lacks exclusive rights to sign off on a deal covering non-direct foreign investment and a system on dispute settlement between investors and governments.

"It follows that the free trade agreement can, as it stands, only be concluded by the EU and the Member States jointly," the court said in a statement.