SINGAPORE - Singapore is in for a tough period and it will remain that way for a while, said Deputy Prime Minister Tharman Shanmugaratnam on Wednesday (Sept 28).

"This year we had soft growth in the first half of the year, I think the second half of the year will be weaker, so we will probably end up somewhere in the lower end of the 1-2 per cent range." 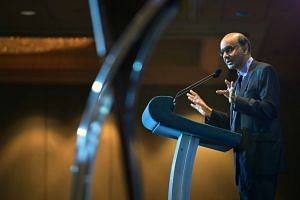 DPM Tharman rules himself out as next prime minister: 'I am not the man for PM'

Responding to a question from The Straits Times on whether he felt the MAS survey of professional forecasters, which tipped 1.8 per cent economic growth this year and next, might be too pessimistic, Mr Tharman said the slower growth reflects a few factors.

"Structurally, we're now in a new mode of growing. We can't keep growing by increasing manpower, we have to get productivity up.

"But even if things go well in Singapore, structurally we're talking about normal growth being 2-3 per cent, which is relatively good by the standards of most economies."