Shares of Vard Holdings jumped 6.52 per cent after the shipbuilder said late on Sunday its Italian parent Fincantieri is offering to buy out minority investors at 24 cents a share.

The counter rose 1.5 cents to close at 24.5 cents yesterday.

Outside of last week's sharp run-up ahead of the announcement, Vard shares have not traded at such a level since January. But some investors said they expect to see the offer revised upwards before they part with their shares.

Shareholder Chris Low said: "Vard has made significant progress in turning its order book around away from offshore support vessels towards fishing boats and luxury cruise ships. That its owner would come in to buy the depressed company out has been in the works for a while," he said. "Still, I expect them to revise the offer up further, at least closer to the 30-cent mark to make it attractive."

The offer price represents a premium of about 11.63 per cent, 24.35 per cent, and 29.73 per cent over Vard's volume-weighted average price per share for the one-month, three-month and six-month periods respectively up to and including Nov 11, but falls below the net asset value per share of 36 cents. 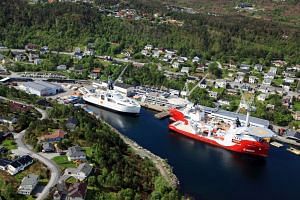 OCBC analyst Low Pei Han recommended that shareholders accept the offer if they are "not prepared to ride the offshore cycle", since the stock had a consensus fair value estimate of 15.9 cents before the offer.

Fincantieri's offer is conditional upon a 90 per cent ownership level. It said it wants to delist Vard to achieve greater management flexibility amid "unfavourable oil and gas market conditions".

As valuations in the sector remain depressed, the privatisation trend is expected to persist.

Two possible candidates here are Mermaid Maritime and Pacc Offshore Services Holdings, Mr Sarkar said. "Mermaid is about 87.3 per cent held by the Thoresen group and its related management, leaving only $36.6 million in free-float market capitalisation. The Thoresen group has the necessary ammunition to take Mermaid private.

"Pacc Offshore is 81.89 per cent owned by the Kuok group, and is a more stable long-term bet versus peers with no immediate debt concerns and positive operating cash flows in the year to date."

A version of this article appeared in the print edition of The Straits Times on November 15, 2016, with the headline 'Shares of Vard perk up amid buyout bid'. Subscribe
Topics:
More
Whatsapp Linkedin FB Messenger Telegram Reddit WeChat Pinterest Print Purchase Article Copy permalink