Retail sales continued to slide, with revenue down in March compared with the same month last year.

Takings at the till dipped by 1 per cent but at least that was much improved from the revised 9.9 per cent year-on-year plunge in February. March's figures also beat the 2.2 per cent fall forecast by analysts in a Bloomberg poll.

Sales were down 1.5 per cent if motor vehicles were excluded.

Revenue in most retail segments fell, with optical goods and books racking up the biggest decline at 6.4 per cent, according to the Department of Statistics yesterday.

Food retail takings were down as well, sliding 5.7 per cent from March last year.

All in all, the rise of online retail sales numbers is likely a silver lining to Singapore's overall retail sales industry.

Sales of computer and telecommunications equipment slipped 4.9 per cent, while department stores and sellers of watches and jewellery recorded a decrease of 4.6 per cent.

However, retailers of medical goods and toiletries performed better, with takings up 2.8 per cent, partly due to higher demand for cosmetics and toiletries.

The motor vehicle industry, and supermarkets and hypermarkets also prospered, with revenue edging up 0.9 per cent.

Ms Lee said: "The bright spot seems to be in motor vehicle sales, which rose... in March and rebounded by a rise of 5.8 per cent in the first quarter (versus a fall of 13 per cent in the last quarter of last year), after the poor performance last year with a 9 per cent fall."

Takings in the food and beverages services industry rose 0.7 per cent compared with March last year.

Most segments in this sector registered growth, with fast food outlets leading the way, thanks to a 6.1 per cent increase.

But restaurant takings fell 3.6 per cent compared with the same period last year. 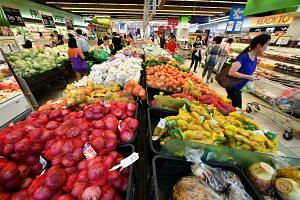 "The labour market may see some slowdown following weak gross domestic product growth in the first half of the year.

"While Budget 2019 measures such as the Merdeka Generation Package may provide some support in the second half of the year, it will likely only be a small boost. A slowdown in visitor arrivals due to the US-China trade war may also weigh on retail sales growth."

The total value of food and beverage services sold in March was estimated at $868 million compared with $863 million in March last year.

Total retail sales came in at an estimated $3.8 billion, with online transactions accounting for about 5.3 per cent.

United Overseas Bank economist Barnabas Gan noted that online sales as a percentage of total retail sales has grown. He said: "All in all, the rise of online retail sales numbers is likely a silver lining to Singapore's overall retail sales industry."