Having officially taken over the Tuaspring desalination plant last Saturday, national water agency PUB will start the process of replacing its poorly performing membranes to ensure that it continues to produce water reliably.

Welcoming Tuaspring's workers yesterday, Mr Bernard Koh, PUB's director of water supply (plants), said: "Today is the first working day, even though we took over the plant on May 18. Now, you are part of the PUB team.

"You have only one mission, and that is very clear - supply good water... I believe we have a very good team here... This plant needs upgrading works, replacement work. You know the condition. Let's work together and restore it to the full 70 million gallons per day (mgd)."

Mr Koh oversees all of PUB's waterworks, desalination plants and Newater plants in Singapore, while general manager Kenneth Chua will now oversee the Tuaspring plant. Mr Chua is one of three PUB employees with experience in operations and maintenance of desalination plants who have been posted to Tuaspring to help with the transition.

The transfer from embattled water treatment firm Hyflux took place following the termination of the water purchase agreement with Tuaspring last Friday. The desalination facility is part of the Tuaspring Integrated Water and Power Plant that had cost Hyflux $1.05 billion.

Under the water contract, Tuaspring is required to deliver up to 70 mgd of desalinated water per day to PUB over the 25 years between 2013 and 2038. Its plant capacity is equi-valent to 16 per cent of Singapore's daily water demand of 430 mgd.

However, the plant has had operational issues since early 2017, and Hyflux lacked the funds to resolve those issues.

It had been unable to replace poorly performing membranes in the ultra-filtration and reverse osmosis systems promptly, which affected the quantity and quality of the water produced. It had also failed to supply PUB with 70 mgd of desalinated water per day on numerous occasions. 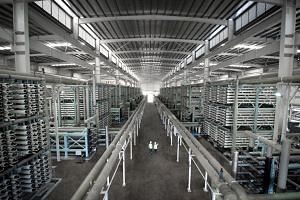 Hyflux's fall from darling of the entrepreneurial scene to troubled firm: 5 must-reads

A $530 million rescue plan by SM Investments, an Indonesian consortium formed by Salim Group and Medco Group, was supposed to have helped Hyflux fix its operational and financial defaults under the water contract. But after Hyflux aborted the deal early last month, PUB stepped in.

"Membrane replacement is necessary to ensure that plant capacity remains at designed capacity... Certain membranes need to be cleaned regularly. If not maintained, their performance will deteriorate faster... The default was that the concession company was unable to deliver the required capacity when needed," Mr Koh told reporters yesterday.

He declined to give details of the production shortfall.

He declined to disclose how much it will cost and how long it will take to replace the membranes.

"When the membranes have been replaced, we can bring (the plant's water output) back up to 70 mgd," Mr Koh said.

To facilitate a smooth transition, PUB conducted several town-hall meetings with the plant's existing staff about a month ago, prior to the takeover, and explained their employment terms and conditions.

"Our priority was to ensure the staff joined us to facilitate the continuation of operations. That was done successfully," he said.

About 90 per cent, or 36 staff, were re-employed by PUB under what Mr Koh described as "no worse off basis" conditions. Most of the staff's concerns had been over their terms of employment, including bonuses and other benefits.

"They were pleased and relieved they were not worse off," Mr Koh added.

Workers in jitters for a year

For about a year, workers at the Tuaspring desalination plant were unsure about their jobs as news of Hy-flux's problems worsened.

Their worries eased only in the weeks after April 17, when PUB announced its decision to terminate the water purchase agreement with Hyflux and take over the plant.

Several town-hall meetings were held to address staff concerns and to assure them that PUB would be making employment offers to them.

Ms Hamidah Mohd Razak, a senior quality environmental, health and safety manager who had been with Hyflux since October last year, said: "There was a lot of uncertainty initially. Our biggest concern was job security. We were worried where we could go. Now that it is cleared, it is a fresh change for all of us."

On her employment terms and benefits, Ms Hamidah, 37, added: "That is the best part. It stays as it is. I am quite grateful for it because a lot of people were worried over whether there would be salary cuts. So far, there aren't any changes. Even our leave entitlement is getting better."

Asked why she joined Hyflux even as its problems worsened after it filed for bankruptcy protection in May last year, Ms Hamidah said: "We like to think positively about the company we are joining. At the end of the day, it is a personal choice."

Mr Krishnamoorthy Chandrasekar, the senior manager for operations and maintenance (water) and a Singapore permanent resident, said the workers had been stressed for more than a year, particularly the foreign S-pass holders, over "whether we would have a job. But after the town-hall meetings with PUB, we are very happy".

The 46-year-old has been with Hyflux for more than six years, with nearly four of them at Tuaspring.

Technician Uthirapathi Selvamani, 36, an Indian national on a work permit who has been with Tuaspring for five years, is also relieved.

"I had been worried for the past year. It is my first job in Singapore," he said.

A version of this article appeared in the print edition of The Straits Times on May 22, 2019, with the headline 'PUB to replace membranes at Tuaspring for reliability'. Subscribe
Topics:
More
Whatsapp Linkedin FB Messenger Telegram Reddit WeChat Pinterest Print Purchase Article Copy permalink