Insurer Prudential Singapore raised the Central Provident Fund (CPF) contribution rate it pays for its employees above the age of 55 to 17 per cent yesterday, bringing it up to the level it pays for younger employees.

The workers' contribution rate drops as well, to 13 per cent, 7.5 per cent and 5 per cent respectively. CPF members can also choose to make cash top-ups to their accounts up to certain limits.

At Prudential, the new increase will kick in only if the employees also voluntarily raise their individual contribution rate to 20 per cent - the mandatory rate for staff up to 55.

Prudential calculated that with the increase in contribution rates, a 61-year-old employee with a monthly salary of $5,000 could save $1,025 more in CPF funds each month, or $12,300 over a year.

It has 46 staff who are aged over 55, or about 4 per cent of its employee count of 1,200, which does not include financial advisers.

The additional savings would help finance my retirement years and potential healthcare expenses. More importantly, I do not have to depend on my children for financial support.

PRUDENTIAL CUSTOMER SERVICE OFFICER SUE LI, on the firm's move to increase the CPF contribution rate for older workers who raise their own contributions. She said she would gladly do so.

The company said the new scheme is opt-in as some individuals may prefer to have more disposable income to meet their immediate needs.

It added that it is the first financial institution to introduce this and it has done so in consultation with the Singapore Insurance Employees' Union (SIEU).

Prudential Singapore chief executive Wilf Blackburn said that with rising lifespans and healthcare costs, employees will need to save more to fund their extended years.

"The additional CPF monies could help them build a bigger retirement nest egg so they will be more financially ready for the future," he said. 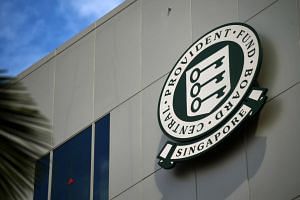 10 things to know about CPF

Prudential has scrapped the retirement age of 62 for its staff since October last year.

CPF contribution rates and their impact on retirement adequacy are being looked at by the Tripartite Workgroup on Older Workers, which will give an update by September. The group, which was formed last year, is also looking at a timeline for raising the retirement and re-employment ages.

There have been calls by groups including the People's Action Party Seniors Group, which champions elderly causes, to raise the contribution rates.

Singapore Business Federation chief executive Ho Meng Kit said he hopes more companies will raise their contribution rates for older workers, as this will encourage more workers with experience to return to the workforce while boosting their retirement adequacy.

But he noted that this will raise business costs and impact competitiveness. "Therefore, any mandated increase in CPF contributions for older workers should be introduced gradually, allowing room for companies to adjust over time," he said. "This is especially so when our companies, across different sectors and industries, are facing unique challenges in today's uncertain global climate."

SIEU general secretary Luke Hee said the union is glad that employees are given the flexibility to decide if they wish to opt in for the new scheme depending on their financial commitments.

Prudential customer service officer Sue Li, 63, said she will be more than happy to top up her own CPF contribution rate to receive the higher contribution from her employer.

"The additional savings would help finance my retirement years and potential healthcare expenses. More importantly, I do not have to depend on my children for financial support," she said.