The move to fine-tune the total debt servicing ratio (TDSR) is clearly not a relaxation of cooling measures but is best seen as a step to avert hardship during an economic slowdown.

The amended refinancing framework announced by the Monetary Authority of Singapore (MAS) on Thursday will protect both banks and home owners, experts note.

Two groups of owners, in particular, can benefit.

Some owner-occupiers who bought their properties after the TDSR was introduced in June 2013 may not be able to clear the 60 per cent TDSR threshold now, perhaps due to incurring additional liabilities, reduced income or even job loss.

Thursday's rule change means the TDSR threshold will no longer apply if they want to refinance loans for their own homes.

"Although this group of people make up a small percentage, they may need this new guideline more than others," said Mr David Baey, MoneySmart head of mortgage.

The deals on offer now could be a three-month Sibor plus 0.75 per cent or less, making rates effectively about 1.62 per cent. 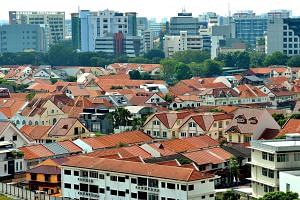 Changes to TDSR rules: 6 things you need to know

The rule change also helps people with investment property loans. Previously, they could refinance above the 60 per cent TDSR threshold only if they committed to a debt reduction plan - this varies according to the bank - and applied by June 30 next year.

MAS has now spelt out what the debt reduction plan is and has taken away that June 30 deadline.

But as much as some in the market may have hoped, they will not affect new demand for homes and do not signal that any changes to cooling measures are nigh.