SINGAPORE - Lured by Singapore's stable political environment and relatively strong office rentals, Hong Kong investors pumped a total of US$1.4 billion (S$1.94 billion) into the Republic's real estate in the first half of 2019.

This accounted for more than a quarter of the US$5.2 billion in total outbound real estate investment from Hong Kong during the period, making Singapore the top destination, Cushman & Wakefield Research said in its latest report on Greater China outbound investments released on Tuesday (Aug 27).

"Some of these Hong Kong investors and funds have been active in Singapore for some time, but the political situation in Hong Kong has coincided with more high-net-worth-individuals and family offices from Hong Kong inquiring on potential purchases," said Christine Li, head of research for Singapore and South-east Asia at Cushman & Wakefield.

James Shepherd, head of research for Asia-Pacific at Cushman & Wakefield, said: "Singapore may increasingly be viewed as a comparatively safe haven given the challenges that some other global destinations are facing."

The second most popular destination for Hong Kong investors was the United States with almost US$1.2 billion deployed in H1, followed by the United Kingdom at around US$900 million and Japan with about US$850 million. 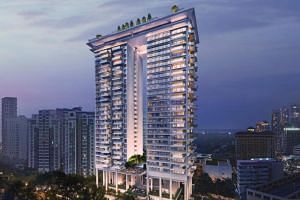 For instance, The Place Holdings bought Realty Centre for $148 million in a commercial collective sale in April. Singapore-listed The Place Holdings deals in branding, events management and tourism-related business development, and is backed by China's The Place Investment Group.

Mainland Chinese investors' traditionally favoured bias for the US and the UK have remained quiet as trade tensions and Brexit uncertainty persisted, Mr Shepherd noted.

This also comes as mainland Chinese overseas real estate investment plunged 68 per cent year on year to a seven-year low of US$3.8 million during the first half of 2019, amid restrictive outbound investment policies and a tightening lending environment in China, coupled with heightened global economic uncertainty.

From Hong Kong, outbound investment overseas also slowed by 31 per cent year on year to US$5.2 billion in H1 2019 as downward pressures mounted.

For the rest of this year, mainland Chinese real estate investors are likely to show interest in Australia as well as countries linked to the Belt and Road Initiative.

Overseas assets are currently less attractive because of the recent yuan depreciation, although investors may be encouraged to hold money offshore if they expect a further decline in the yuan exchange rate, Cushman & Wakefield said.

"International real estate for Chinese companies' own use should still see demand where such businesses continue their global expansion, as many such companies prefer to buy rather than lease," he added.