SINGAPORE - Private home prices marked their tenth straight quarter of decline as they fell 0.7 per cent in the first quarter from the fourth quarter of last year, according to data from the Urban Redevelopment Authority on Friday (April 22).

This was similar to its flash estimates released for the quarter earlier this month.

Prices are now 9.1 per cent below their last peak in the third quarter of 2013. 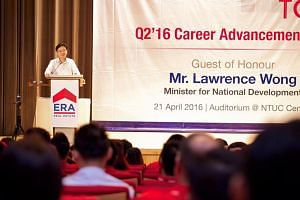 Prices of non-landed homes in the suburbs, or outside the central region, led the price fall as they declined 1.3 per cent, while prices in the city fringes or rest of central region were unchanged.

Prices of non-landed homes in the prime districts or core central region rose 0.3 per cent after declining previously.

Rents also posted their tenth straight quarter of decline as they fell 1.3 per cent in the first quarter, with the rental decline seen across all regions.

They are now 9.1 per cent below their last peak in the third quarter of 2013.

The vacancy rate of private homes was lower in the first quarter compared with the end of last year, as it fell 0.6 percentage points to 7.5 per cent, representing 24,919 vacant private homes.

However, the vacancy rate for executive condominiums (ECs) rose 5.9 percentage points to 14.3 per cent in the first quarter, representing 2,901 vacant EC units.

At the end of the first quarter, there was a total supply of 53,512 uncompleted private homes in the pipeline, compared with 55,638 units in the previous quarter.

Including ECs, there are a total of 66,099 units in the pipeline - one-third of which come onstream in the rest of this year.

A total of 23,062 private homes and ECs are expected to meet completion in the remaining three quarters of 2016, with another 15,643 units completing next year.

In comparison, 22,267 private homes and ECs were completed last year.