En bloc fever is getting even hotter with privatised HUDC estate Florence Regency in Hougang likely to be put up for collective sale soon.

The approval level from owners at the 336-unit project is over 75 per cent. The Straits Times understands three other former HUDC developments - Laguna Park, Pine Grove and Ivory Heights - have also started the collective sale process.

Six residential projects, including three privatised HUDC estates - Rio Casa, Eunosville and Serangoon Ville - have been sold en bloc since May in a resurgent market.

Florence Regency in Hougang Avenue 2 will likely hit the market in the coming months, although marketing agent JLL had declined to reveal the owners' asking price.Consent from at least 80 per cent of owners must be obtained for a collective sale tender to be called.

Florence Regency has a land area of 389,236 sq ft, with a remaining lease term of 71 years. The estate was privatised in 2014, and this is its first shot at selling en bloc. Property agents say several privatised HUDC estates - built under the Housing and Urban Development Company scheme in the 1970s and 1980s - are jumping on the en bloc bandwagon, given the rising optimism in the property market and developers' hunger for sites.

Of the 18 HUDC estates, which have all been privatised, 10 have been sold en bloc. Farrer Court fetched the highest price at $1.34 billion when it was sold in 2007 to CapitaLand. "HUDC developments appeal to developers because most of them are in established residential estates, which means there will be demand for the (new) projects when they are launched," noted Dr Lee Nai Jia, research head at Edmund Tie & Company. 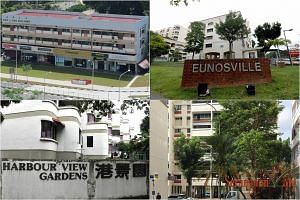 Yes, en bloc fever is back in Singapore

Three other developments have elected their collective sale committee: the 660-unit Pine Grove near Ulu Pandan Road, the 654-unit Ivory Heights in Jurong East Street 13 and the 516-unit Laguna Park in Marine Parade Road. The Straits Times understands that owners at the 136-unit Chancery Court in Dunearn Road will be holding an extraordinary general meeting later this month to appoint a sales committee to start the en bloc proceedings.

CBRE capital markets director Galven Tan said: "If you look at the public land tenders, there are consistently 13 to 14 bids each time. Those who don't win will still be out there looking for sites... residential land sales should remain quite active for the rest of the year."