Condominiums and private apartment resale prices dipped by 0.2 per cent in September from the previous month. This follows the 0.3 per cent decline in August, which was slightly wider than the 0.2 per cent drop earlier estimated by SRX.

Before August, resale prices had an unbroken 12-month run to new highs. But they are now down by a modest 0.5 per cent from their peak in July when the additional property curbs were announced.

Resale prices are still up from a year ago, being 10.8 per cent higher than in September 2017.

The cooling measures continued to hit the volume of transactions. An estimated 702 non-landed private residential units were resold in September, a 0.7 per cent decrease from the 707 units resold in August.

Year on year, transactions have fallen more sharply. The number of resale transactions is down by 44.3 per cent from the 1,260 units moved in September 2017.

OrangeTee & Tie research and consultancy head Christine Sun said the pullback in housing demand could be attributed to slower sales during the Hungry Ghost Festival, the cooling measures and a divergence in price expectation between buyers and sellers.

She said: "Potential buyers may want to capitalise on the slowing market and they may be expecting resale prices to moderate. Sellers, on the other hand, may be reluctant to drop prices as the economy is strong and the job market is still healthy.

"Therefore, resale volume may maintain at the current level for a while as the asking and selling price of flats may take some time to converge.  Sales are usually slower during the year end as many people would be on holiday. In fact, the current sales volume may be 'normalising' to the levels seen prior to the property run-up in March last year." 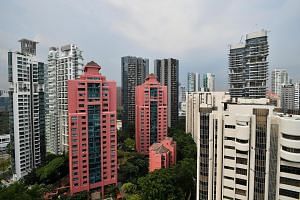 Completed condo prices up 0.5% in August

SRX data also showed that the premium that buyers were prepared to pay over market value inched up in September after tumbling following the July property curbs.

TOX measures how much a buyer is overpaying or underpaying on a property based on SRX Property's computer-generated market value.

In terms of location, resale prices in the suburbs or outside central region actually saw a month-on-month increase of 0.5 per cent in September to a new high since June 2013.

But this was offset by price falls of 1.2 per cent and 0.8 per cent for non-landed homes in the prime or central region and city fringes or rest of central region, respectively.