The rental market for both private apartments and Housing Board (HDB) flats last month remained robust despite the tightened Covid-19 measures and border restrictions in place.

Rents for condominium units rose by 0.3 per cent compared with the month before and are up 7.3 per cent from a year earlier. They are still down 11.4 per cent from their peak in January 2013, according to flash data from real estate portal SRX released yesterday.

HDB rents saw a slightly higher increase of 0.7 per cent last month from April and are up 7.9 per cent from a year before. However, they are still 9.2 per cent off their high in August 2013.

With the May increases, condo rents extended their rise to five consecutive months, while HDB rents have climbed for 11 straight months.

The rise in rents for HDB flats last month was broad-based, climbing for both mature and non-mature estates, as well as all room types.

Huttons Asia chief executive Mark Yip noted that rents for HDB flats in non-mature estates have risen at a faster rate of 8.6 per cent compared with the 7.2 per cent increase in mature estates.

"This could be due to tenants moving to non-mature estates where the level of amenities can be on a par with or even better than in some mature estates," he said.

ERA Realty head of research and consultancy Nicholas Mak said the increase in rents in both markets illustrates a healthy demand in the local leasing market, despite Singapore going into a month-long heightened alert phase, which is in place till Sunday.

Unlike the process of purchasing a property, Mr Mak said tenants are likely to be more willing to commit to rental units selected through online platforms, which is why the leasing market was largely unaffected by recent Covid-19 curbs.

Rental volume for condos increased by 1.7 per cent to an estimated 4,603 units leased last month, compared with 4,527 units the month before.

The number of leasings last month is also 39.3 per cent higher than in May last year, during Singapore's circuit breaker period.

Most of the units rented were located in the outside central region, which made up 41.2 per cent of total rental volume. Units on the city fringes accounted for 30.7 per cent, while those in central Singapore made up 28 per cent.

HDB rental volume last month saw a slight drop from April, down 0.9 per cent to an estimated 1,686 units from 1,702 units in April. 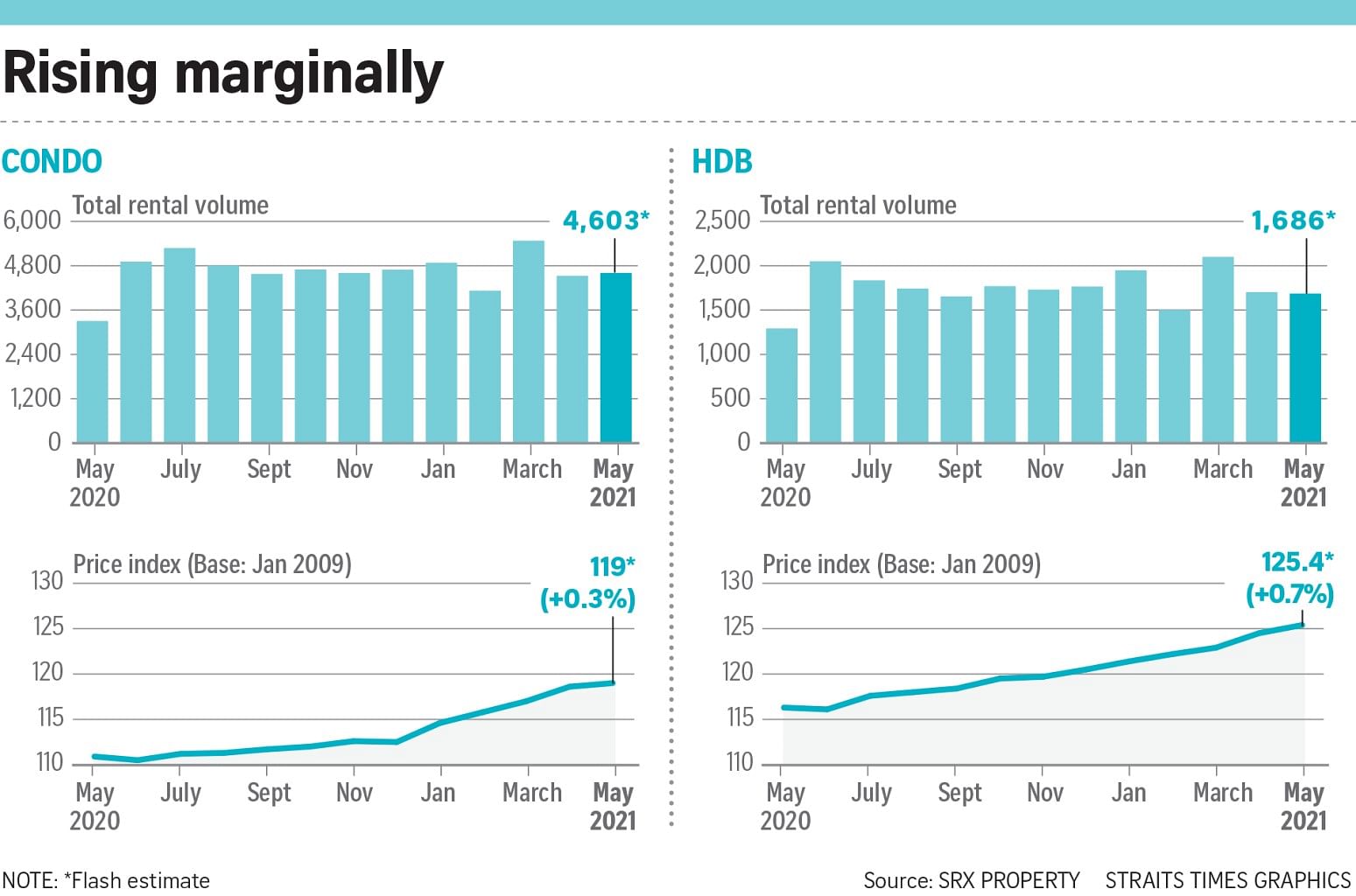 HDB rental volume last month is 30.4 per cent higher than it was a year ago, but 8.5 per cent lower than the five-year average volume for the month of May.

Ms Christine Sun, senior vice-president of research and analytics at real estate firm OrangeTee & Tie, said that based on ground observations, the market appears to be propped up by tenants who are renewing their leases and an increasing number of Singaporeans who are renting.

These are most likely HDB home owners who sold their flats recently to capitalise on rising HDB resale prices and are renting a place in the meantime, she said.

"Instead of keeping their condos for rental income, some landlords have decided to sell their units too, since the private resale prices have also been recovering well in recent months," said Ms Sun, adding that this resulted in affected tenants looking for new accommodation.

She expects the rental market to pick up further, should the Covid-19 situation in Singapore continue to improve and borders gradually reopen.