BEIJING • China's home prices accelerated last month at the fastest pace in nearly two years, a sign that Beijing's efforts to boost a slowing economy may once again be heating up frothy real estate markets.

While solid growth in the sector could cushion the impact of a vigorous multi-year government crackdown on debt and escalating trade tensions with the United States, it could also stoke fears of a bubble.

Average new home prices in China's 70 major cities rose 1.4 per cent in August from a month earlier, higher than July's reading of 1.1 per cent, Reuters calculated from an official survey published on Saturday.

That marks the fastest gain since September 2016 and the 40th straight month of price hikes, Reuters calculations show, despite curbs to rein in a near-three-year real estate boom that has spilled from megacities to the hinterland.

In a sign of broadening market strength, 67 out of the 70 cities surveyed by the National Bureau of Statistics (NBS) reported a monthly price rise for new homes, up from 65 in July. Only one city - Xiamen in the south - had an actual price fall.

Compared with a year ago, new home prices climbed 7 per cent, speeding up from July's 5.8 per cent rise, the NBS data showed.

"Property price gains this year are due to looser credit and the delayed effect of strong government stimulus introduced in previous months to reduce inventories, which will slowly kick in," said Hwabao Trust analyst Nie Wen. 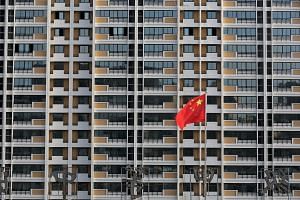 Chinese policymakers have rolled out measures to support growth this year, including cutting the sum of cash some banks must hold as reserves several times to boost lending to smaller businesses.

August price growth in the 35 small cities that the official survey tracks was more robust than in larger cities, rising 2 per cent from a month ago, the NBS said in a statement accompanying the data. The top price performer in August was Wuxi, a third-tier city near Shanghai, whose prices soared 3.4 per cent month on month, NBS data showed. That comes even as many less-regulated smaller cities are expected to gradually tighten curbs.

China's four biggest cities - Beijing, Shanghai, Shenzhen and Guangzhou - posted an average monthly price gain of 0.3 per cent, compared with an increase of 0.2 per cent in July. While many property analysts believe the authorities will be more cautious about stimulating property investment than in past downturns, some suspect additional funds will inevitably flow into the market as investors look for opportunities.