SINGAPORE - The recent hike in the top marginal rate of the buyer's stamp duty (BSD), along with the substantial premiums developers pay for residential sites, may translate to higher prices for new projects in the future, said president of the Real Estate Developers' Association of Singapore (Redas), Augustine Tan.

But while the BSD hike may "add some friction to transaction volumes" as buyers are still price sensitive, it is unlikely to derail the recovery.

Speaking to some 620 guests at the Redas annual Spring Festival lunch on Friday (Feb 23), he said: "The property market is in the early stages of a recovery and positive buying sentiments are likely to continue. Barring unforeseen circumstances and on the back of a stronger-than-expected economic growth outlook in Singapore, sale momentum of 2017 is likely to carry through to the next few years."

In addition, Singapore properties are relatively affordable compared to cities such as Shanghai and London.

Citing a JLL research, Mr Tan said that it took 4.8 or five years to afford the average price of a home in Singapore in 2016, compared to the 14 to 15 years in Shanghai and Beijing, and 8.5 years in London.

This affects all residential properties bought on or after Tuesday, including en bloc property deals and residential land deals.

Second Minister for National Development Desmond Lee, who also spoke at the Redas lunch, agreed that there is renewed confidence in today's property market.

But he also stressed that markets move in cycles and the number of residential units available for sale is expected to more than double in the next few years. 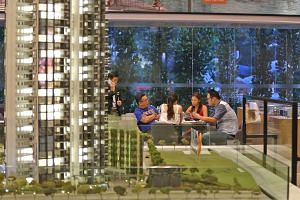 Redas' Mr Tan estimated that another 34,495 private residential units could be available for sale in 2018 and 2019, based on land sale sites that have yet to be granted planning approvals and those that can be generated from the first-half 2018 government land sales (GLS) programme.

Meanwhile, there are still 120 sites at various stages of preparing for collective sales.

"Assuming the estimated 5,125 displaced owners from collective sales do not downgrade to public housing and analysts' forecast of 13,000 sale transactions for 2018, the overall unsold inventory and new supply represents four years of demand," he said.

Apart from supply and demand dynamics, other longer-term developments that could affect the property market include the global economic outlook and demographic shifts.

Mr Tan noted that the susceptibility of Singapore's economy to external demand warrants a close look at the structural challenges in the global environment and investment behaviours that will pose risks to market stability in the long term.

The increased use of technology and globalisation as well as an ageing population also means developers will have to look at new building concepts and buyer-centric typologies that meet these changing needs, he added.

"With land scarcity in Singapore, there may be a need for more mixed-use developments with higher density." nnnn