The first weekend of sales for upcoming condominium One Pearl Bank saw 80 per cent of the 200 units released being snapped up.

Real estate developer CapitaLand said in a statement yesterday that 160 units were sold as at 5pm, at an average price of $2,400 per square foot. This is about 20 per cent of the 774 residential units in the 99-year leasehold condo, which is being developed on the site of the former iconic Pearl Bank Apartments.

Sales began last Saturday. More than 4,000 people had shown up when the sales gallery opened for public viewing on July 13 and 14.

CapitaLand said the 160 units sold included a mix of studio, one-, two-and three-bedroom apartments. The most popular were the one-and two-bedders, which made up 56 per cent and 31 per cent respectively of the units sold. About eight in 10 of the buyers are locals.

Prices start from under $1 million for a studio apartment, and more than two-thirds of the units are priced below $2 million each.

The condo will have a sheltered linkway to the upcoming triple-line Outram MRT station. All the units come with fully integrated kitchens, built-in lighting, air-conditioning, cabinetry and curtains. 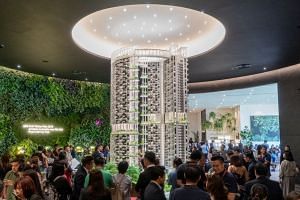 CapitaLand said One Pearl Bank was the best-selling new launch in the central area so far this year, based on data from the Urban Redevelopment Authority's Real Estate Information System.

But the figures drew mixed reviews from analysts, with one saying he was disappointed given the attractive pricing and included furnishings.

Savills Singapore research head Alan Cheong said the sales rate of 20 per cent of the total units was "in line with the overall economic situation". Cushman & Wakefield's head of research for South-east Asia Christine Li said it was encouraging, given that the price point was towards a more high-end product. "The timing is good as the dust has settled, post-cooling measures," she added.

He added: "We are confident the project's iconic status and excellent attributes will continue to attract interest from prospective home buyers."

A version of this article appeared in the print edition of The Straits Times on July 22, 2019, with the headline '80% of 200 One Pearl Bank units snapped up at launch'. Subscribe
Topics:
More
Whatsapp Linkedin FB Messenger Telegram Reddit WeChat Pinterest Print Purchase Article Copy permalink