Finance Minister Heng Swee Keat has seen financial meltdowns in his time, so his warning that "when you have a period of euphoria, you end up with a very hard landing that you can call a crisis" carried some weight yesterday.

Mr Heng said at the Real Estate Developers' Association of Singapore (Redas) spring festival lunch that the 2008 global financial crisis illustrated just "how interlinked economies and financial systems are, and that we will have to be very watchful of this global development and these interlinkages".

"The development of markets in Singapore, whether it is the stock markets or property markets, is closely tied to developments in the region, particularly in Asia and the world," he added.

Mr Heng, fresh from his Budget speech on Monday, noted that Prime Minister Lee Hsien Loong's characterisation of the Merdeka Generation as one that "faced the problems resolutely, worked with the Government, and when necessary, accepted the bitter medicine that made us strong again" applied also to the real estate sector.

"From time to time, there has been bitter medicine, but we face the problem resolutely because we work together and we can really continue the progress," he added.

"Redas has played a very important role in our nation-building journey. In fact, many of you here are responsible for making Singapore what it is today." 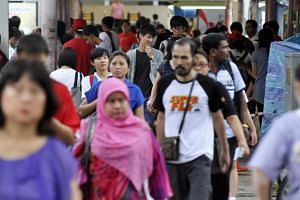 Singapore has a place in the world as long as it stays relevant and adapts, says Heng Swee Keat

His remarks came after Redas president Chia Ngiang Hong called for a review of a condition in the additional buyer's stamp duty (ABSD) policy, which requires developers to complete developing a new project and to sell all its units within five years, in exchange for upfront remission of ABSD payable when they buy residential land.

"Excessive land banking should be discouraged, but some flexibility in terms of time frame to sell out projects" could help, Mr Chia said.

The land ABSD stands at 30 per cent and limits the time frame for all residential sites, regardless of size, to be sold within five years, Mr Chia said yesterday. This policy has pushed all developers to exhaust their inventory at around the same time, and could partly account for the land price escalation in 2017 and 2018 because everyone was replenishing land banks at the same time, he added.

Mr Heng pointed out that the need to focus on the long term is going to be greater for the property sector, adding that "the Concept Plan set a very important way to develop our little red dot".

"I have been very surprised how, in many of my overseas trips, whenever I meet property developers and planners and architects, the one thing that they mention is how Singapore has been able to maximise this limited space to achieve maximum impact... Necessity is the mother of invention, and if we can turn this necessity into an invention, our developers will have a role everywhere in the world," he said.

Mr Heng also challenged the real estate industry: "The question is what are the most significant innovation in real estate that we can think of, where can we push the frontiers of real estate because it's no longer just about physical space, it's about what we use that space for and how we can maximise value in that space."