This, as a large supply pipeline is looming and hiring sentiment has turned cautious due to geopolitical uncertainty and an expected economic slowdown.

Rents declined 1 per cent in the October to December quarter, compared with a 0.3 per cent increase in the previous quarter, according to data from the Urban Redevelopment Authority (URA) released yesterday.

The contraction in rents was led by the landed segment, which fell 2.1 per cent in the fourth quarter, against a 0.5 per cent rise in the previous quarter. But for 2018, rents of landed properties rose 2 per cent.

Rents of non-landed properties fell by 0.8 per cent, compared with a 0.3 per cent increase in the previous quarter, and were up 0.4 per cent in 2018.

Outside Central Region (OCR) rents registered the second biggest decline, falling by 1.7 per cent, compared with the 0.9 per cent increase in the previous quarter. 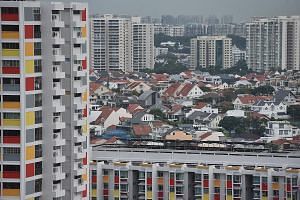 For 2018, rents of non-landed properties in the CCR decreased by 0.1 per cent, while rents in the RCR and OCR increased by 1.1 per cent and 0.7 per cent, respectively.

Even though the vacancy rate hit a five-year low of 6.4 per cent, that did not boost rents significantly, noted Mr Ong Teck Hui, JLL's senior director (research & consultancy).

This, as landlords are being more flexible about closing deals ahead of a large supply pipeline coming up after 2020 and as leasing demand is capped by policy controls on hiring of foreign labour, Mr Ong said.

Still, this is an improvement, compared with a vacancy rate of 6.8 per cent in the third quarter, according to OrangeTee & Tie research and consultancy head Christine Sun, given a bigger jump in available private homes in the fourth quarter.

The improving vacancy rate may be a sign that the leasing market could be recovering, she said. Another positive is that an increasing number of large firms like Dyson may shift their headquarters or key operations here amid rising global geopolitical uncertainty.