SINGAPORE - Taking a break does not seem to come easy for stressed-out Singapore residents.

Of 600 Singaporeans and permanent residents polled in a recent survey, three in 10 said they did not know how to relax and half said they were stressed out by the thought of doing nothing.

This is despite 52 per cent of those surveyed saying they felt stuck in a daily routine they were unable to get out of, and 74 per cent wishing they could spend more time with their families and loved ones.

The survey, commissioned by Sentosa Development Corporation (SDC) and conducted online in April, also found that excluding mealtimes, people spent only 2.8 hours of leisure time on average with family and friends, or just slightly over 1 per cent of a week.

Experts discussing the findings on Thursday (June 27) at a media event said that making time for self and family requires deliberate adjustments.

Dr Daniel Fung, chairman of the Institute of Mental Health's medical board, said people often talk about work-life balance as though there must be separate times for work and life, but it would be more useful to create harmony incorporating both aspects.

"Balance is impossible... If you only try to find a balance, that means time with family is time with family, it's not about work, then you will always struggle," he said at the event at FOC Sentosa. 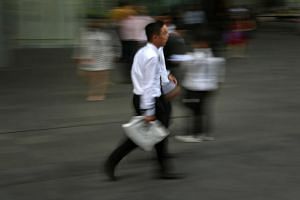 Burnout likely a common problem here, S'poreans among most stressed at work globally

"Create a situation where while you're at work, you can also think about your family," he added, though he noted that it does not work for everyone and some people need to have a more structured containment of various aspects of their lives.

Dr Sin Harng Luh, an assistant professor for geography at NUS, said it would go some way towards people being able to unwind if everyone were to consider the well-being of people under their authority.

"Whatever role I have in society, or at work, or in school, I make choices which value my students' free time. I don't expect them to read 20 articles before the next class, because I think that their free time is very important as well," she said.

"If as a society bosses could have that kind of mentality, then it would change things very rapidly in Singapore."

The idea of work-life harmony has come to the fore recently. Earlier this month, Deputy Prime Minister Heng Swee Keat announced that a citizens' panel will be launched to gather ideas from Singaporeans on how to improve work-life harmony.

In response to the survey findings, SDC launched a campaign on Thursday to promote the taking of breaks.

Called Make Time, it includes a 30m-long series of swings along Palawan beach facing the sea, social media videos and a billboard on the Ayer Rajah Expressway asking commuters: "Do you believe in life after work?"

SDC chief marketing officer Lynette Ang said that the idea is to challenge people to take stock of how they spend their time.

"We always think that there's more time. (We say,) when I make enough money, when I own the dream car, the dream house, then I'll relax and do other things. But you never know how much time you have, so we want to challenge people to make time, now."