Letting her customers pay with PayNow had a bigger impact on her business than pre-school group director Wendy Tan imagined.

Faced with the problem of no-show parents, the co-founder of Josiah was looking for a more convenient way for parents to pay for childcare services.

"We used to have a no-show issue," said Ms Tan. Parents would book to attend the pre-school's enrichment programmes but not turn up, she said. "We weren't able to check if they would be attending."

The pre-school conducts about six classes a week for an enrichment programme called Baby Sensory, for children aged up to three years and their parents.

Typically, two out of 10 parents per class were no-shows, Ms Tan said, as they did not need to pay to book a place for the session.

Payment could be made only on the spot with cash, cheque or Nets when they showed up for classes, Ms Tan said, adding that the pre-school does not accept credit cards because of the additional fees.

However, with PayNow, parents could now pay Josiah directly in advance when they booked a place in the programme, which showed their commitment to attend the classes. 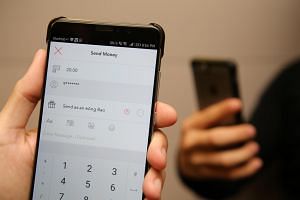 28m PayNow transactions in first half of year as usage soars

Since it started using PayNow, there have been no no-shows, Ms Tan said. Parents who pre-pay are also able to reschedule classes if an emergency crops up, she added.

As almost all its customers book classes through online platforms such as Facebook, using PayNow for payments seemed like the logical next step, noted Ms Tan, who has centres in Suntec City, Tampines Mart, Aperia Mall in Kallang, Plaza 8 at Changi Business Park and Mediapolis near Buona Vista.

Parents with children in Josiah's childcare and pre-school centres now use PayNow to pay for uniforms and field trips as well.

Such payments are below $1,000, the daily cumulative limit for transactions using PayNow. For purchases above that, an Internet banking token would be needed to complete the transfer.

For monthly childcare and pre-school fees, parents have been using bank transfers as such payments may be above $1,000.

Customers receive a digital invoice which comes with a QR code that they can scan and pay, Ms Tan said, adding that she approached her relationship manager at OCBC Bank in October last year to set up the payment scheme.

Ms Tan said: "The process for customers to pay is now very straightforward. Previously, they may forget to pay because of work or they may be overseas... But now, when we send them a gentle reminder that payment is due, they will pay before the late charges kick in."

A version of this article appeared in the print edition of The Straits Times on August 09, 2019, with the headline 'No more no-shows for enrichment lessons, thanks to PayNow'. Subscribe
Topics:
More
Whatsapp Linkedin FB Messenger Telegram Reddit WeChat Pinterest Print Purchase Article Copy permalink