S'pore's largest sea-based system will be in north, producing 6,388 MWh of energy yearly

A floating solar panel system roughly the size of five football fields will soon come up near Singapore's northern shores, in the Strait of Johor.

The solar panel system, which is expected to be operational next year, was announced at the 2018 Pro-Enterprise Panel-Singapore Business Federation Awards yesterday at Marina Bay Sands Expo and Convention Centre.

The platform will be able to generate 6,388 MWh of renewable energy annually, which is equivalent to powering about 1,250 four-room flats. The use of solar energy also means a reduction in greenhouse gas emissions of about 2,600 tonnes every year over the next 25 years and beyond.

The project is supported by the Economic Development Board and will be located north of Woodlands Waterfront Park.

Mr Frank Phuan, co-founder and chief executive of Sunseap Group, said: "Our floating solar panel system supports Singapore's ambition to be a solar hub for Asia, and we hope it will ignite more deployment of alternative methods of tapping solar energy."

Sunseap participated in the world's largest floating solar panel test-bed in Singapore's Tengeh Reservoir. The test-bed was about 1ha in size.

In land-scarce countries like Singapore, the use of solar panel systems is hindered by space constraints and limited roof space, said Mr Phuan.

The platform had to be more robust to withstand the harsh conditions of the open sea and overcome the barnacles that will grow on it.

It was also difficult to find a location for the solar panel system because Singapore's coastal areas can be busy maritime environments with many shipping vessels.

"We consulted about nine agencies and every time one of them brought up an issue, we had to restart the whole consultation process," Mr Phuan said. "We didn't make much headway for two years until we got in touch with the Pro-Enterprise Panel."

The panel brought together different agencies and got the various parties to highlight key concerns and suggest solutions.

"It's an example of agile regulations because the agencies were not just gate-keeping and telling us what we could not do, but they were finding ways to make it work. It allowed us to zoom in on suitable sites until we could find the right one," Mr Phuan said.

Sunseap's solar panel system was cited by Minister for Trade and Industry Chan Chun Sing as an example of the result of collaboration across government agencies. 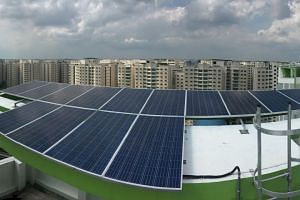 Mr Chan, who gave out awards at the ceremony, said: "This is an example of who should regulate this floating solar panel on the sea - is it the maritime agency, water agency, Energy Market Authority or environment agency?

"It is probably all of the above and more, but for a business, there is only one agency."

He added that for Singapore to have its competitive advantage, regulations have to be "agile" to suit the evolving needs of businesses and the expectations of people.

Government agencies also have to collaborate with one another, as well as with trade associations and chambers and technology companies, to keep their regulations flexible and up to date, Mr Chan said.

He added: "We are small enough for us to know each other very well and to build that deep sense of trust between regulatory agencies, businesses and other societal actors.

"And it's because of this, we're confident that, going forward, if we are able to have those agile regulations in place ahead of time, we will add a new pillar of competitive advantage to our society."