China's move to weaponise the yuan in response to United States President Donald Trump's proposed tariff hike sent markets across Asia and Europe skidding deeper into the red and heightened risks of a painful currency war.

The Chinese yuan slid past seven against the greenback - a critical threshold that has not been breached in more than a decade - fuelling concerns that a weaker Chinese currency could unleash a wave of deflation across the world amid weakening global demand, especially for manufacturing. Protests in Hong Kong added to the gloom.

The fact that the Chinese central bank allowed the yuan to slip past seven to the US dollar suggests that it has all but abandoned hopes of a trade deal with the US, Capital Economics senior China economist Julian Evans-Pritchard said.

"The (People's Bank of China) has explicitly linked today's devaluation with the renewed tariff threat made by the US last week. In doing so, the PBOC has effectively weaponised the exchange rate," he said. Many Asian currencies weakened against the greenback, including the Singdollar, which fell to 1.3814 yesterday from 1.3768 on Friday.

The Straits Times Index tumbled more than 2 per cent. Hong Kong slumped 2.85 per cent, hammered by economic woes and escalating street protests. South Korea and Jakarta fell more than 2.5 per cent, while other Asian markets were off by more than 1 per cent.

This sell-off is similar to the one in 2015, when China engineered a small devaluation of its currency to support growth, and global stock markets panicked, said Mr Tom Elliott, international investment strategist at consulting firm deVere Group.

But the latest devaluation is a result of a trade war with the US. "The question now is how will the US respond?" Mr Elliott said.

He added: "Chinese goods, always competitive on price, will be even more competitive. This is bad news for manufacturers outside of China, at a time when global manufacturing is struggling with weakening demand growth and the negative impact of the trade war on their supply lines and profits."

A FEW BENEFICIARIES IN TRADE WAR

Some SMEs have managed to broaden their product range and exports to the US by helping their US customers buy from other countries instead of China. Those manufacturers that have factories outside China are exporting to the US from there instead of China.

MR KURT WEE, president of the Association of Small and Medium Enterprises.

Mr Wayne Chua, a business development manager at Litat Import and Export, a Singapore coconut juice manufacturer, blamed the trade war and currency volatility for declining sales volume over the past six months.

"I have three importers in China. My beverage sales to one of them, (denominated in US dollars), has dropped 20 per cent in the past few months because of the currency impact and declining consumption. I am selling to another importer in yuan, but I am taking the currency risk and it has eaten into my profit, so I may have to increase prices to that importer," he said.

In addition to Asian exporters facing greater competition from the onslaught of cheaper Chinese goods, Maybank Kim Eng senior economist Chua Hak Bin warned of risks that a depreciating yuan may "trigger a 'beggar thy neighbour' currency war as other countries may allow their currencies to weaken to cushion the blow to their exports".

"This could cause Trump to find other means of penalising countries deemed by him to be manipulating their currencies," he added.

Also worrying are the escalating protests in Hong Kong, where Singapore banks and several developers and retailers have operations. "The impact will depend on how long the protests continue, or whether it will blow over in a few weeks. Over the long term, some multinational corporations may look to move some of their financial operations to Singapore as an alternative if the protests continue," he said. 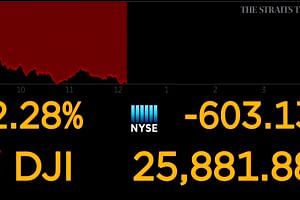 While many Singapore manufacturers are suffering declining business volume, which can hurt the Republic's export-oriented economy, Mr Kurt Wee, president of the Association of Small and Medium Enterprises, pointed to a few "incidental beneficiaries" of the trade war.

"Some SMEs have managed to broaden their product range and exports to the US by helping their US customers buy from other countries instead of China," he said.

"Those manufacturers that have factories outside China are exporting to the US from there instead of China," he added.

One such beneficiary is Mr Ernie Koh, executive director of furniture manufacturer Koda, which exports to the US from its factories in Vietnam and Malaysia.

But with many US customers now buying from Vietnam, manufacturing costs there may increase due to a sharp increase in foreign investment, he said. "Another growing concern is that Trump may target Vietnam for tariffs. So, we are now considering expanding our factory in Malaysia and even opening in Indonesia so that our sources are diversified," he added.

Regionalising into Australia and Asean has become more important as well because of the trade war, he added.

And while his business was "ahead of the curve" compared with Chinese exporters to the US, which are hamstrung by the tariffs, that advantage may now be eroded with the yuan's latest depreciation, Mr Koh noted.

"Chinese exporters will now be more competitive. I am concerned about that, but the yuan's depreciation is expected to be limited," he said.

A version of this article appeared in the print edition of The Straits Times on August 06, 2019, with the headline 'Markets take a beating as China lets yuan slide in response to US'. Subscribe
Topics:
More
Whatsapp Linkedin FB Messenger Telegram Reddit WeChat Pinterest Print Purchase Article Copy permalink